These is the updated Juventus 1995 through 1997 season font. I’m already done these sets before, however these new sets few text and numbers already fix. During these period, Juventus kits supply by Kappa label.
Juventus Football Club finally managed to regain the European Cup trophy after 11 years, winning the Champions League final against Ajax in Rome. That was the climax of a successful season, that saw Juventus winning the Supercoppa Italiana in the late summer of 1995, before going on to finish second in the league. The club successful continuesly, Juventus manage to winning domestic title and a second consecutive Champions League final. 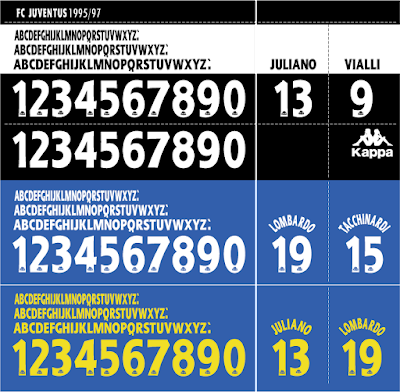