I’m already upgraded all the Barcelona font collection from 1998 through 2016 sets. First of the series FC Barcelona font 2000 through 2002 season. Early 2000-01 season, Barcelona under coach Lorenzo Serra Ferrer. The club attained a respectable fourth place in the league, 2001-02 season was to be the last but one under the guidance of Joan Gaspart as President and the single season of management by Carles Rexach at Barcelona. Same fourth place in the league as previous season, 11 points below eventual winners Valencia, as well as reaching the semi-finals of the Champions League. Patrick Kluivert was top scorer in all competitions, with 25 goals. 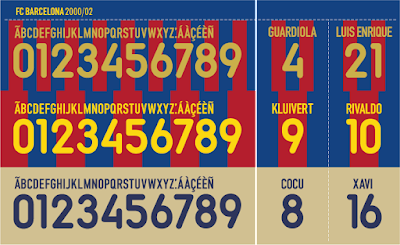 I’m upgraded the numeric no. 9 and 3 from the old template and add letters.