FIFA Ballon d’Or gala will be taking place on 13 January 2014 in Zurich Kongresshaus and this is a highly coveted yearly ceremony where football players, coaches and teams are rewarded for their great performances of the previous year. The major talking point is of course the Ballond’Or award which goes to the best player in the world and this year we have three nominanees with Lionel messi, Ronaldo and Ribery fighting it out for the ultimate prize.

FIFPro WORLD XI 2014 Predictions
There is another award which is FIFpro World XI which is assembled by the jury based on players performances in the last year and today we predict out FIFPro World Eleven going into the ceremony. Bayern Munich player will of course dominate the list having won everything they were part of. 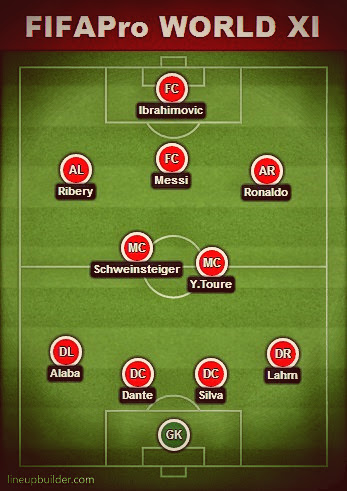 Keeper: Manuel Neuer
Had a super season, Neuer was a like a wall throughout 2013 with Bayern Munich and helped them win the Champions League, Bundesliga and German League cup.

Centre Backs: Thiago Silva & Dante
Two of the best defenders at the moment, they both play for Brazil and won the confederations cup while Dante went on to notch up 3 trophies with Bayern Munich

Full Backs: Philip Lahm & David Alaba
Again two Bayern Munich full backs. Lahm is one of the most compact player and he can play on either side of the defense, Alaba is young but already a superb full back and will remain in the game for quite a while.

Central Midfielders: Schweinsteiger & Busquets
Sergio busquets guided Barcelona to League title and he is their very crucial player though do his work secretly, Bastian Schweinsteiger however has come of age. The verstile midfielder is backbone of Bayern and Germany.

Three Attacking Players (Ronaldo Messi Ribery)
All three of them fighting for the Ballon D’or awar in the same night, so they have to be in the team and there is no other formation available to put them together so that they can actualy play.

Centre Forward: Robin Van Persie
Here you are spolied for choices. Robin Van persie was instrumental in Holland qualifying from group stages with ease, the top scorer from European zone. Won the Premier League on the other hand we have Ibrahimovic and Falcao and both scored goals for fun. But I have to go with Robin Van Persie here.