USA ended their 16-year FIFA Women’s World Cup™ drought in the most emphatic manner imaginable with a Carli Lloyd hat-trick lifting the Stars and Stripes past holders Japan for their third title. 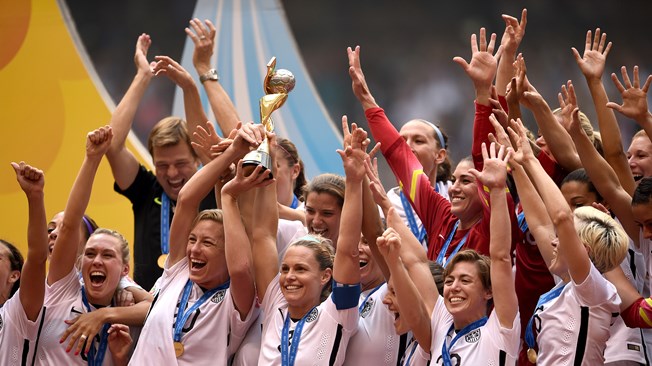 A scarcely believable four-goal salvo inside the opening 16 minutes meant there was only ever going to be one winner to the joy of the largely pro-USA 53,341 crowd in Vancouver.

USA were quickest to the ball from the opening whistle and immediately reaped greater rewards than they could ever have imagined. A low driven Megan Rapinoe corner from the right deceived a flat-footed Japan defence and Lloyd finished first time from near the penalty spot to put a perfect flourish to a training ground move.

Barely 150 seconds had passed on the stadium clock but, incredibly it was about to get even better for the Stars and Stripes. A low free-kick from Lauren Holiday evaded a swathe of players before the ball found its way, almost magnetically, to Lloyd who applied the finishing touch from close range. USA were 2-0 up inside five minutes and Lloyd had nabbed the two fastest goals in Women’s World Cup Final history.

Japan were looking uncharacteristically shaky at the back and when central defender Azusa Iwashimizu failed to deal with a Tobin Heath delivery, Holiday latched onto the loose ball to volley home. Only fourteen minutes had elapsed but USA already had one hand on the trophy.

Just two minutes later the contest was effectively over as Lloyd completed a 13-minute hat-trick with a goal straight from the realms of fantasy. Collecting the ball inside her own half Lloyd advanced before unleashing a high shot from the halfway line over the head of Ayumi Kaihori, whose desperate back-peddling only resulted in finger-tipping the ball onto the inside of the post and into the net.

Incredibly Lloyd, playing the match of her life, almost immediately scored another, heading just wide and narrowly failing to become the first person to score four in a World Cup Final of either gender. Then it was the turn of Alex Morgan who made a trademark driving run into the box and although she did not make full connection with her shot Kaihori was still forced into a diving save.

However, Japan grabbed a much-needed goal midway through the opening half thanks to inspired finishing from Yuki Ogimi who ended Hope Solo’s run of 540-minute unbeaten run by superbly spinning away from marker Julie Johnston and coolly firing home.

The Nadeshiko momentarily looked like they would pull another goal back three minutes later and only some fine scrambling defening prevented a clear shot on goal with Aya Miyama’s final shot unable to trouble Solo.

Five minutes after the break Morgan Brian forced Kaihori to push a long-rage effort over the crossbar, but it was Japan who managed to reduce the deficit further as Johnston could only get a glancing header on Miyama’s perfectly-flighted free-kick inadvertently directing the ball past Solo.

Yet USA restored their three-goal margin almost immediately as Heath netted from close range after Morgan Brian provided the assist after Kaihori was unable to deal with a corner.

Striker Morgan then looked to get her name on the scoresheet with a sharp turn and shot narrowly wide. While there were to be no further goals, some of the biggest roars of the day were reserved for the late introductions of veterans Abby Wambach and Christie Rampone.