Few sports can provide such contrasting highs and lows as football. England’s 23-strong squad at Canada 2015 will undoubtedly wholeheartedly agree. 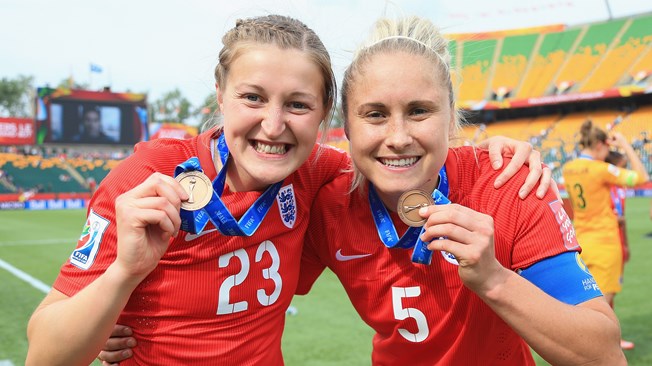 On Wednesday England suffered gut-wrenching anguish as the unluckiest of own goals in the penultimate minute of the match ended their dreams of a ticket to the Final. Laura Bassett, the unfortunate defender in question, exited the pitch in tears, and headed for the team bus with her face buried in a towel.

Fast forward just three days and England’s joy was palpable after a tense 1-0 extra-time victory. They had defeated old rivals Germany – a first ever win over the two-time champions in 21 attempts – to secure the 2015 FIFA Women’s World Cup™ bronze medal. This time England players danced their way through a lap of honour at Edmonton’s Commonwealth Stadium enjoying every second.

Typifying England’s resolute and committed display was captain Steph Houghton, who made countless timely interceptions throughout the match, including one crucial clearance off the line. The skipper said overcoming the heartbreak of that semi-final defeat was a mental and physical challenge. “I’m not going to lie, the last few days have been hard,” Houghton told FIFA.com after the match.

“As a group we have had to stick together, and we have done that throughout the tournament. I think we deserved this medal. It is not easy to go against Germany as European champions, and I have a lot of respect for them. Today we saw an England team with a lot of character and desire.

“We were disappointed with the semi-final, coming so close to reaching a World Cup Final. We knew this was going to be a really tough test for us today, but we knew we had a chance to win a medal.”

No one showed more mental fortitude than Houghton’s central defensive partner Bassett who started the match despite dealing with a testing few days. “She showed by her performance how professional she is and what it meant to her,” Houghton said of Bassett. “I was the first person to go across and give her a hug at the final whistle, because we have been through a lot together and to play at the back with her was amazing.”

The team’s achievement at Canada 2015 will forever remain a watershed moment for England women’s football. The nation’s previous best achievement on the world stage was a last-eight finish in a 16-team field. The transformation of the team in recent teams under new coach Mark Sampson has been remarkable. Just two years ago England crashed out of the UEFA Women’s EURO without a win. Yet over the past month England recovered from a low-key opening loss to France to record five wins, including against former champions Norway and hosts Canada.

Houghton says she hopes the team’s performances will add further momentum to women’s football in England. “Hopefully we have inspired a nation,” said the Manchester City defender. “When we get back what we have done will hopefully start to sink in.

“In the back of our minds we had the idea that we wanted to inspire young girls and boys to play football, and I think we have done that. The support we have had back home has been amazing. Hopefully the people back home will enjoy English football again, and it is good for all of us.”