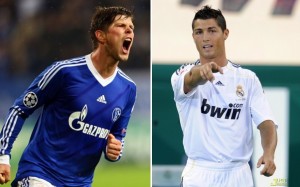 FC Schalke took on Real Madrid in the first leg of the Champions League first knockout round match, but it did go too well for the home side as madrid took an early lead through Karim Benzema in just 13th minute of the kickoff, while record signing Gareth Bale scored in 21st minute to the put the tie to bed as far as Real madrid is concerned, two away goals in first half and they way Schalke defended cant see them taking the fight to Real Madrid.

Game was 2-0 for real madrid at the end of first half and Carlo Ancolotti would have been happy but in the 2nd half Schalke was even more poor and Real madrid punished with two more goals, first of which came through top scorer Cristiano Ronaldo while Benzema added another to make it 4-0 and match, set and qualification sealed to the quarter finals. Videos of all goals have been updated while extended match footage will be available couple of hours after the match.