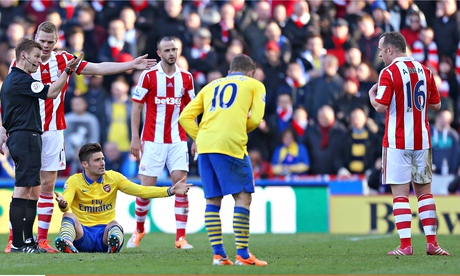 Charlie Adam has been charged by the Football Association with violent conduct following an incident involving Olivier Giroud during Stoke City’s 1-0 win against Arsenal on Saturday.

Adam appeared to stand on the opposing striker during the second half of the game at the Britannia Stadium, something not seen at the time by referee Mike Jones and his fellow match officials. Stoke’s Scotland midfielder has until 6pm on Tuesday to respond to the charge.

The FA statement read: “The incident, which was not seen by the match officials but caught on video, occurred during the fixture between the two sides at the Britannia Stadium on Saturday 1 March 2014.

“Under a new pilot project in Premier League matches this season, if an incident has not been seen by the match officials, a three-man panel of former elite referees will be asked by the FA to review it and advise what, if any action, they believe the match referee should have taken had it been witnessed at the time.

“For an FA charge to follow, all three panel members must agree it is a sending-off offence.

“In this instance, the panel were of the unanimous decision that it was an act of violent conduct.”

Stoke reacted to the FA’s announcement by issuing a statementstressing Adam’s intention to “appeal vigorously”.

It said: “The club have learnt within the last hour that the FA has chosen to charge Charlie Adam. Charlie and the club are surprised and disappointed to learn of this and will appeal vigorously against the decision.”