BBC MATCH OF THE DAY HIGHLIGHTS: 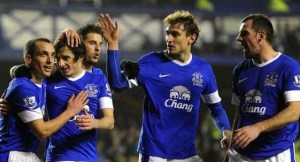 Everton moved into the top 4 of the premier league teams with yet another superb home win and this time against a tough side Norwich City. Everton opened the scoring through Gareth Barry who scored in 23rd minute of the match while Kevin Mirallas scored in the 2nd half to give all three points to everton who have 41 points and currently just 5 behind Chelsea who are leading the table on Saturday. This is a massive first half of the season for the merseyside blues under new manager Roberto Martinez.

Norwich City on the other hand are 15 in the table and just two points ahead of the 18th team in the league. Everton need to keep this great run of form going if they want to get into the Champions League places. But whatever happens in the 2nd part of the season Everton has shown real promise this season.