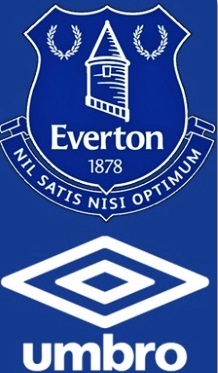 Everton has signed a kit suppliers deal with Umbro for a 7 year period starting from the start of next season. Umbro has had deals with Everton couple of times before as well, back in 1974 and 2009 but since Umbro was bought by Nike, all their kit deals also went to big american brand. Nike sold Umbro to ” Iconix Brand Group” in 2012 and since than they are making a steady comeback in world football.

The double diamond brand is back in business with one of the most promising teams in premier league under their banner. Everton are having a great season and Umbro will be paying them double the money they are getting at the moment with Nike. Their current contract with Nike is £3m per season while with Umbro they will be making £6m a year for a 5 year contract which might be extended.

The 2014-15 season kits for Everton will be supplied by Umbro and they will be officialy released in July 2014. Umbro has pomised fans to design modern and unique kits and since Umbro are making their way to the top, they will do their best to design something special.