In all important Group D game where England and Uruguay took on each other for a massive match which had the destiny of both sides, England needed atleast a draw to keep their hopes alive going into the 3rd group game. Roy Hodges went with the same lineup which started against Italy while uruguay welcome back their talisman Luis Suarez. 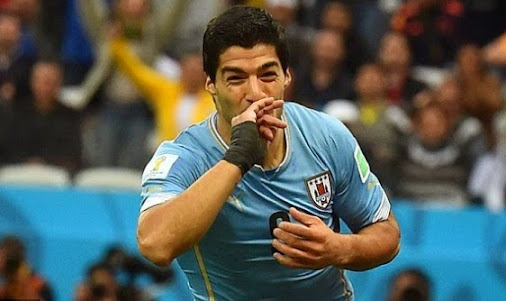 Luis Suarez Scored twice to get a win over England

Check out the short and long match highlights of the England’s match vs Uruguay as England are all but knocked out going into the last game.

After getting beaten against Italy in their first world cup game, England will be hoping to turn things around in what is a must win game for both Uruguay and England. Uruguay suffered a huge upset in the first match they were humbled by Costa Rica. The game will be played on 19th June 2014 and the kickoff is at around 16:00 Local (20:00 BST)

Uruguay started the match much better than they did against Costa Rica and they won all the early exchanges, England players looked nervous and anxious but they did create a couple of good openings. Luis Suarez scored the first goal of the game when Edinson Canavni found him with a beautifuly weighted pass inside the box and he headed home away from Joe Hart who could not have done anything about it.

The game was 1-0 for Uruguay at the break and things were not looking good, Roy Hodgson did not make any changes at the break but England did up the temp and put Uruguay under real pressure. Ross Barkley was brought on for Rahim Sterling but England kind of lost their shape in the final 20 minutes and they were just bombing forward in a hope to catch Uruguay for this odd goal.

Roy Hodgson side played decent football against Italy but they failed to convert the chances which came there way and losing out the opening fixture which makes this game against Uruguay a must win clash. Hodgson has many selection headechs to worry about whether to start with Wayne Rooney upfront keep him out of the lineup. While Uruguay will have their Talisman Luis Suarez back in the starting lineup.

Ox-Chamberlain might be back from injury straight into the starting Xi playing on the left side of the midfield while Hodgson might give Rooney that central role just behind Sturridge. Sterling should start after his great performance against Italy. Ross Barkley put up his claim for a start in midfield.

Luis Suarez absence was felt in ripples against Costa Rica and as the things stand he is all set to appear in the starting lineup for Uruguay alongside Edinson Cavani. While Diego Forlan might start from the bench having played poorly in the first match

Below are the expected lineups of both teams and we will be updating the confirmed lineups 1 hour before kickoff. 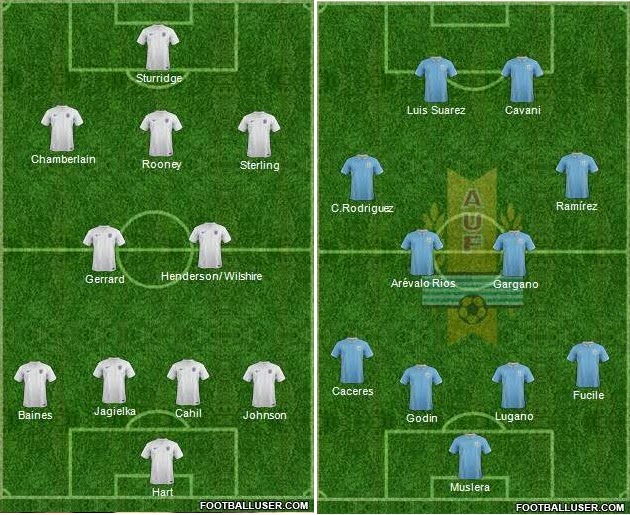 Both teams are coming into this match on the back of defeats, but Uruguay suffered a bigger psychological dent having played poorly and lost, England on the other hand played decent football specialy in the 2nd half when they created many chances but failed to score. If England can rectify there left sided defence combined with keeping Suarez in check, they can nick a win in this one. I am going with a 2-1 win for England.

What do you think of this game ? any predictions ? do you think England can see of the challenge from Suarez and co ? do let me know your thoughts in the comments below.