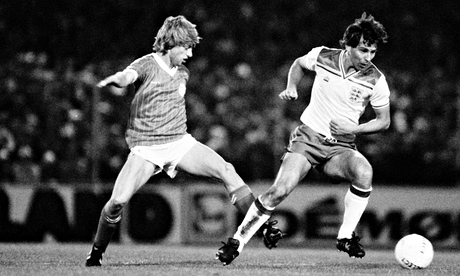 England’s friendly against Denmark on Wednesday is not just the much-discussed final audition for players hopeful of forcing their way into Roy Hodgson’s squad for the World Cup, but also another episode in the oldest rivalry in international football – other than those between teams from Britain and Ireland. It was never, it must be admitted, a particularly ferocious rivalry, but England (representing Great Britain) did beat Denmark in the finals of both the 1908 and 1912 Olympics, while no continental European nation took football as seriously as Denmark did in the years up to the first world war.

The game was introduced to Denmark by British sailors and rapidly spread in a country whose upper class was, at the time, devoutly anglophile. Many were educated in England and took home from the public schools a love of extravagant facial hair and rugged sport. It was English-educated Danes who in 1876 set up Kjobenhavns Boldklub (KB), and three years later they adopted football, becoming the first team to be established on the continent. Ten years later, continental Europe’s first football association was established in Denmark and, in 1904, it was one of seven founder members of Fifa, along with France, Belgium, the Netherlands, Spain, Sweden and Switzerland.

The amateur idealism of the early adopters can be seen in the mock-classical pavilion, complete with Doric columns, that dominated one side of Idraetsparken, built in 1911 as the continent’s first football-specific stadium. But on the other three sides of the ground were cinder terraces, which suggests how far the game had spread among the working classes. BK Frem were founded as a workers’ club in southern Copenhagen in 1886 and the trades unions and the social democrats both promoted football for its health benefits and as cheap, popular entertainment.

Initially Danes played the dribbling game prevalent in England but, after a tour by Queen’s Park in 1898, the style shifted to something closer to the short passing approach favoured by the Scots. Tours by British clubs became common and in 1905 Ilford Town, winners of the London Cup, became the first English side defeated in Denmark as they went down 8–1 and 6–1 to a combined Copenhagen XI. Two years later the same combination side beat Celtic 2–1.

It was at the 1908 Olympics that Denmark got its first real chance to test itself against the best at national level (there had been football at the 1900 and 1904 Games, but no medals were awarded at the time, and the teams involved were club or scratch sides rather than true national teams). The squad it sent to London included Harald Bohr, a professor and the brother of Niels Bohr who would win the Nobel prize for physics and was himself a decent goalkeeper, and two of the four Middelboe brothers, who were stalwarts of KB. Nils Middelboe was the star of the Danish team, a 6ft 2in centre-half who was the Danish record holder in the triple jump and the 800m as well as being part of the Danish champion 4x100m team and a very good tennis player.

With Hungary and Bohemia withdrawing before the tournament began – for financial reasons and after losing their Fifa membership, respectively – there were only two quarter-finals. Great Britain hammered Sweden 12-1 while Denmark put nine past a France B side, with two goals each for Nils Middelboe and Bohr, and four for Vilhelm Wolfhagen, another KB star.

There were another four for Wolfhagen in the semi-final, as Denmark, as the Observer reported, “hopelessly outclassed” France A 17–1, although on this occasion he was outshone by the bandy-legged former blacksmith Sophus Nielsen, who helped himself to 10. Harold Stapley also scored four as Great Britain won their semi-final 4-0 against the Dutch.

The Danes had begun to draw praise from their hosts. “They play a good, hard game with perfect fairness and, in the main, a very sound knowledge of its intricacies,” said the Observer. “Their merits are pace, dash and pluck; their faults a tendency to keep the ball too much in the air (the defect of most professional players nowadays), hesitancy near goal or, what is perhaps worse, a fatal habit of kicking wildly at the critical moment.”

The final, played in front of 8,000 including the lord mayor, the lady mayoress, the sheriffs, Earl Roberts and his daughter, Lady Eileen Roberts, Lord Desborough, Count Brunetta d’Ussaux of Italy and Baron and Baroness de Tuyll of the Netherlands, was not quite the showpiece it might have been. The Observer’s report, in fact, is a masterpiece of curmudgeonliness, as though the journalist couldn’t wait to get the thing done and be off home and rather resented the players for bothering at all. He began by lamenting the fact that the lacrosse final between Britain and Canada overran, meaning it was after 3.30 by the time the game could kick off on the same pitch, which was beginning to look churned even before kick-off.

Then he turned his attention to the incidental entertainment, an early indication of the authorities fearing their sport cannot stand for itself but must somehow be augmented. “The excellent band of the Eighth Hussars played charming music for a time,” the report read, “but one was really not sorry when it ceased, for it is not possible at one and the same time to keep an eye on the goal and lend an ear to Gounod.”

Frederick Chapman put Britain ahead after eight minutes following a melee but, as the Danes held their own, the most noticeable incident in the remainder of the first half was when the ball had to be changed after “showing a partiality for the swimming tank”.

Harald Bohr was praised for “sticking to his man like grim death”, but Vivian Woodward made it 2-0 early in the second half following “a rapid rush” and “a good pass from the half-line”. Even that wasn’t enough to satisfy the demanding man from the Observer: “The famous Tottenham Hotspur player had done next to nothing previously and it was high time he gave a taste of his old quality.”

In fading light, Britain held out, but to no great glory. “It cannot honestly be said that the victors covered themselves or their country with glory,” said the Observer. “There had never” the report went on, been a performance “less representative of real English football … it is much to be regretted that … a truly worthy side should not have been selected to show the foreigner, just beginning to understand the finesses of association football, what the game is like when played by its most skilful exponents.”

Still, it was a gold medal and one that was repeated in Stockholm four years later, Denmark this time being overcome 4–2 in the final. By 1924, the war had changed everything, but for a time Denmark were the only nation that came close to challenging British domination.