Tom Ince and Joe Ledley scored their first goals for the London side as the Eagles soared up the Premier League table. 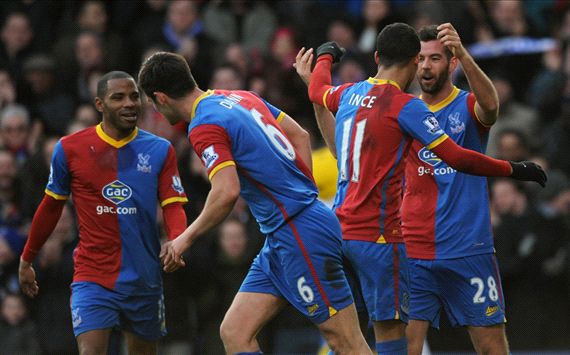 Crystal Palace continued its strong run of recent form with a 3-1 win against West Brom at Selhurst Park on Saturday.Tom Ince scored his first Palace goal to give the home side the lead, before Joe Ledley did the same and a Marouane Chamakh penalty gave Tony Pulis’ side a third.

Ince and Ledley arrived at Selhurst Park on transfer deadline day from Blackpool and Celtic respectively, setting about winning over the Selhurst Park faithful in the best possible fashion, as both found the net in a first half that the home team dominated.

West Brom substitute – and another débutante – Thievy Bifouma reduced the deficit right at the start of the second half but Marouane Chamakh’s 69th-minute strike from the spot sealed the points for the Palace.

Victor Anichebe latched on to the end of Chris Brunt’s pass in the sixth minute before sending a tame effort into the arms of Julian Speroni.

Kagisho Dikgacoi went close for the home side three minutes later but Youssouf Mulumbu was perfectly stationed on the post to clear his effort off the line with his chest.

Palace was not to be denied for long, though, Ince putting the club in front in the 15th minute as he deftly clipped the ball beyond Foster after being played in by Bolasie.

Ince then turned provider 12 minutes later, curling in a corner from the right that the unmarked Ledley met with a thumping header from six yards.

Pepe Mel made a double change at halftime, bringing on Bifouma and Scott Sinclair, and that decision paid immediate dividends as the former exchanged passes with Anichebe and swept the ball beyond Speroni within a minute of the restart.

Speroni brilliantly denied West Brom an equalizer midway through the second half, first tipping James Morrison’s rasping effort behind before then denying Sinclair from close range from the ensuing corner.

Those saves proved especially valuable three minutes later when Chamakh raced away from the West Brom defense and was brought down by Foster, before picking himself up and tucking the spot kick into the bottom right-hand corner.

The home side was given a further boost with the introduction of last season’s top scorer Glenn Murray off the bench, after a long absence with a serious knee ligament injury.

Palace comfortably saw out the game from thereon in, making it 16 points from seven home games under Pulis, while West Brom dropped into the bottom three.