The fourth round of 16 tie will be played between tournament surprise package Costa Rica and 2004 european champions Greece at Arena Pernambuco in Recife on Sunday, 29th June 2014. The game will be the 2nd kickoff of the day starting at 17:00 local time / 21:00 BST. The winner of this match will be taking on either Holland or Mexico in the quarter final match.

Costa Rica came out as the biggest surprise of the tournament as they progressed from a group where nobody gave them a chance, they not only defeated Italians and Uruguay but they also held England to a 0-0 draw finishing top of the group with 7 points. Greece on the other had to do this the hard way as they struggled in the group stages but came to life in the last game where they defeated Ivory Coast to reach the knockouts.

Greece will have their captain Konstantinos Katsouranis back in the squad who got a red card (Two yellows) against Japan and was suspended for the Ivory Coast match. While we might also see Andreas Samaris in the starting lineup who came on as early sub against Ivory Coast and scored the first goal.

Costa Rica on the other hand will go into this match with unchanged lineups which they have used to great effect in the previous encounters in the world cup so far. More team news will be updated here once we here from the both camps.

This is how I expect both teams to lineups in the crunch round of 16 tie, Katsouranis to be back in the starting lineup for Greece. 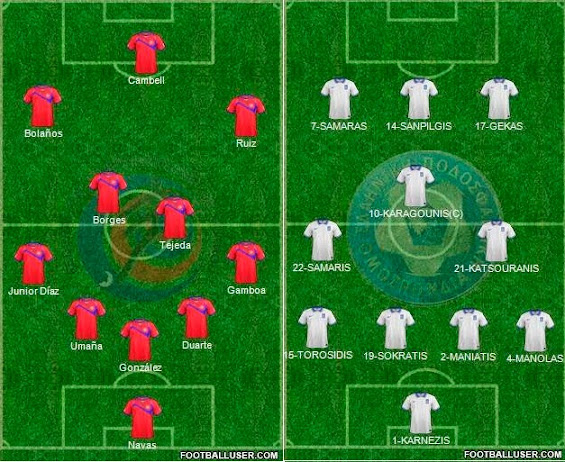 Costa Rica looks like a very balanced side with quite a few of their players at the peak of their form, they have already over-achieved in the competition going into the knockout stages. Greece on the other hand looked very average side in the group stages, but they are team who will always go with defensive strategies no matter what the opposition they are playing against. Costa Rica’s success has been their counter attacking abilities as they were in a group where all other teams were suppose to attack them.

But against Greece they are not going to get many counter attacking chances and that is where I think this game become interesting. Greece is a team which is hard to score against and with their 2-1 win over Ivory Coast they also has some sort of momentum and I can totaly see them getting a narrow win in this one.