Colombia reached the knockout stages in flying colours having beaten all three of their group rivals in some style, even without their talisman Rademal Falcao they were too hot to handle going forward and will be looking to continue their recent form in the game against fellow south americans Uruguay who turned things around in the group stages having lost their first game.

Uruguay will have to do without Luis Suarez who has been banned for atleast 9 international matches for uruguay plus 4 month suspenion from any kind of football whether its international or club level. Uruguay looked a very average side in their first game against Costa Rica which they lost 3-1 and that was without Suarez, it was his inclusion in the team which lead to a good win over England and a lucky escape against italians. This is a short preview and statistics of the 2nd round of 16 match.

Colombia has no injury worries or suspensions and they will have a full squad to choose from with James Rodriguez leading the attack, Looking at the head to head record we can safely say that Uruguay has the upper hand with 8 wins 4 defeats and 2 draws.

James Rodríguez and Jackson Martínez are sure to lead the attacking line for Colombia and we wont see any major changes in the starting lineup. Uruguay on the other hand will draft in Diego Forlan in place of Luis Suarez who has been banned from 9 international matches. This is how I expect both teams to lineup. 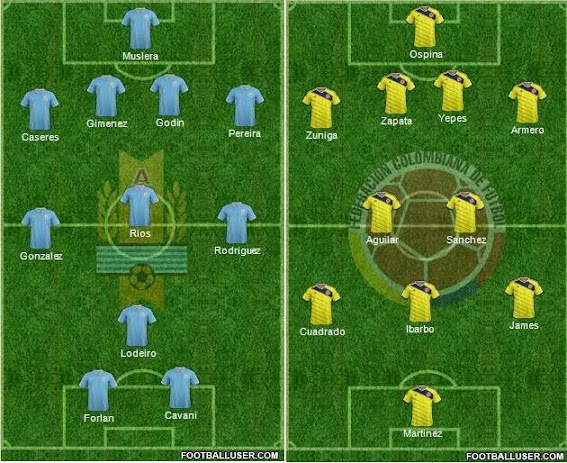 Luis Suarez has not only let himself down but his teammates and the Uruguay fans but also the football fans in general after his stupid biting incident. Now Uruguay’s odds to reach quarter finals are at 3/1. Colombians are playing the best football as far as South American teams are concerned. But this game against Uruguay will be their first real test and If they bring their “A Game” to this match I see no problem for them to get a win.