Japan still has a chance of qualification to next round when they take on Colombia on 24th june the game will be played in Cuiaba kicking off at 21:oo Uktime. Colombia of course have already booked their place in next round being group winners now if Japan beat Colombia and Greece beat Ivory Coast by no more than 2 goals, japan will go through.

It won’t be wrong to say that South American teams has been sensational in the world cup so far, apart from usual suspects Brazil and Argentina are are likely to go through, Colombia, Chile and Ecuador has kind of used the familiar surroundings to great effect. Colombia defeated Greece in the opening game by 3-0 while they also hammered Ivory Coast to book their place in round of 16. FIFA World Cup Live

Japan on other hand lost against Ivory Coast in a narrow 2-1 win having lead most of the game, but their failed to beat 10 men Greece side in their 2nd game. Now they have a mountain to climb as the must win against Colombia and hope greece defeat Ivory Coast by atleast two goals.

Japan are likely to make a couple of changes in the starting lineup which took the field against Greece, Shinji Kagawa will slot in from the start having played as a substitute in the earlier game.

While Colombia might also make a couple of changes as they have already qualified and they will also likely to finish top of the group even if they lost against Japan.

Osaka, Kagawa, Honda and Okazaki to start in the attacking roles with 4-2-3-1 formation while James Rodriguez leading Colombia’s attacking role. 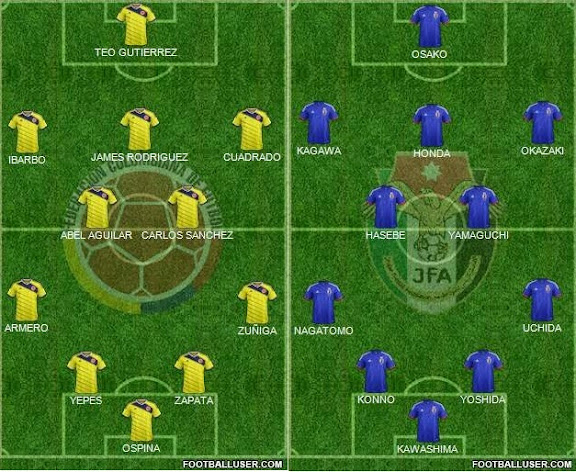 These latin american teams have somthing about them this world cup, they are playing the best football in the competition and I expect that to continue with Colombia securing an easy win over japan who looked toothless against 10 men Greece the other day. I am going with a 3-1 win for Colombia side which will ensure Japan and Greece go out of the comptition.