Ivory Coast and Colombia will have a chance to book their place in the knock out stages of 2014 world cup when they take on each other for the Group C match in the first match on 19th June 2014. The game kickoff time is 13:00 Local (16:00 GMT)

Colombia defeated Greece in their first match in the competition and that victory was quite comprehansive with a 3-0 scoreline, while Ivory Coast had to come from behind to get all three points against Japan. Now three points for either team in this game will book their place in next round. We take a look at some statistics details for both sides.

Colombia will be without “Carlos Bacca” due to injury he picked up against Greece but there is a good news as Inter midfielder Fredy Guarin is passed fit to face Ivory Coast.

Ivory Coast coach Sabri Lamouchi will have to make a bid decision on whether to start with Didier Drogba after his superb performance against Japan which turn things around. But I expect Drogba and Kolo Toure to start from bench and they are likely to keep the 4-3-3 system. 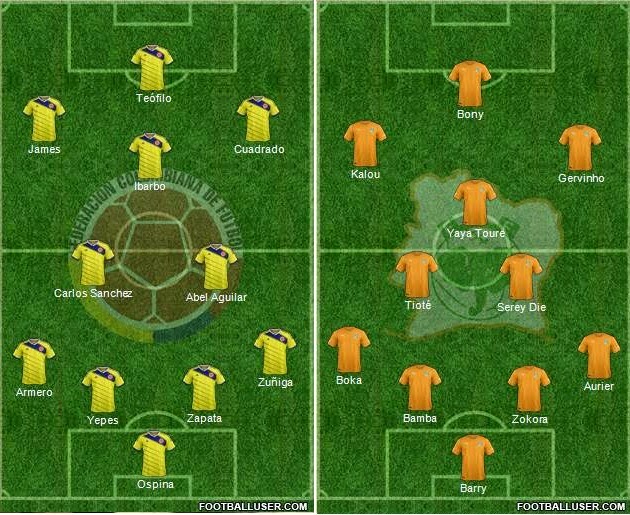 Now this game is a tricky one to predict, Ivory Coast played terrible in the opening half against japan but once Drogba came on he changed the script and looked pretty much unplayable. Colombia on the other hand made easy work of very difficult team greece winning 3-0. I am going with a Colombia win with a very common world cup scoreline of 2-1.