Greece were humbled in their opening fixture in 2014 world cup as South American side Colombia registered a comfortable 3-0 win, James Rodriguez made two goals and scored the third

It was all too easy for Colombia football team who was playing in familiar conditions as the disposed off Greece in style with a 3-0 win. From the first few games its evident that these South American teams will be hard to play against and we might have a all latin american final this year.

Whats you thoughts on the game ? Can Colombia continue ther great form to the next round ? will greece be able to turn things around in the last couple of group games ? do share your thoughts in comments below.

On Saturday, 14 June 2014 we will have 4 world cup games taking place, with Greece kicking off the day against Colombia in what is a very balanced match and we can safely say that this game can go either way. Greece are known for being a tough opponents who can make any teams life difficult with their resiliant defence and quality set pieces, while Colombia will be without Rademal Falcao but they do have a team to get through this group.

Japan will be taking on Ivory coast later in the night and this group has 4 very balanced squads and any of the 4 teams can make it to the knockout stages.

No Rademal Falcao for Colombia leaving Jackson Martin to start upfront on his own, while James Rodrigues, Cuadrado and Ibarbo to start in attacking roles with 4-2-3-1 formation. Greece On the other hand are likely to go with 4-5-1 formation and here is the predicted lineu of both sides. 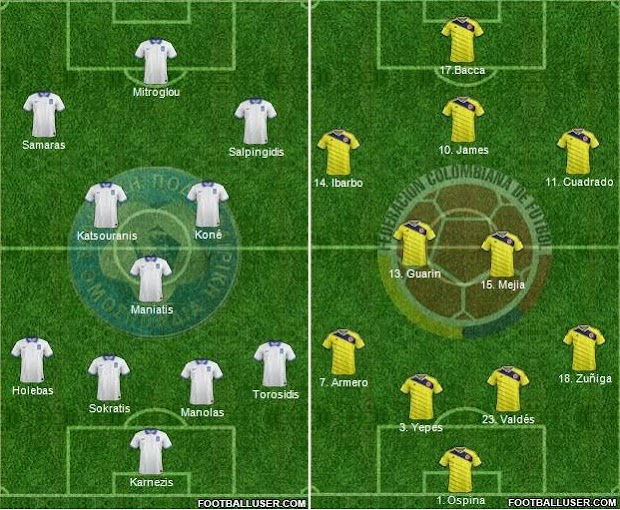 A very difficult game to predict, but Colombia do have firepower upfront to trouble greece. Althoug they will be missing their best player in Falcao and alot depend on how Jackson Martin take the resposibility of leading the line, although I am going with an narrow win for Greece side who will make the game rought in the middle of the park. Its greece 1-0 Colombia for me. What you think of this match, who you favour ? do let me know with you comments below.