Sunderland have put a severe dent on Chelsea’s Premier League title hopes with a 2-1 win at Stamford Bridge. Wickhem and Borini scored for Sunderland to get their hopes for survival back on track. 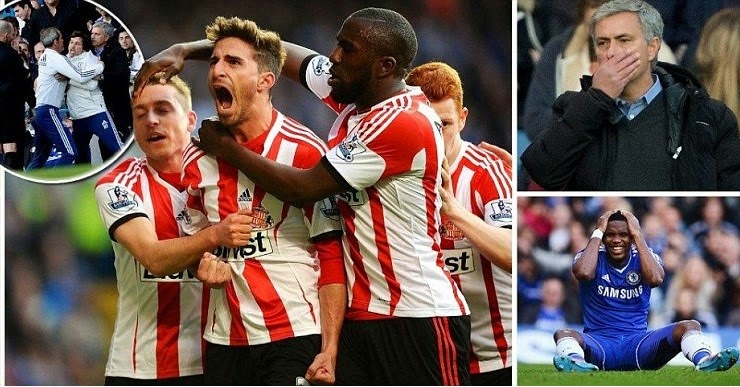 Chelsea took on Sunderland in the premier league game and it was by far the biggest game of their season for Chelsea as they had a chance to put pressure on Liverpool by winning all three points against Sunderland and going 1 point clear before Liverpool take on Norwich on sunday. Jose Mourinho has been playing down his teams chances all season and this game combine with two upcoming matches first against Atletico and than Liverpool could define Chelsea season.

The game started with a bang for Chelsea as Samuel Eto’o scored in just 12th minute of the game, but that lead was short lived when Sunderland scored through Connor Wickham 5 minutes later. From than on Sunderland got much needed confidence and they fought for every ball. Game was 1-1 at the halftime but till Chelsea playing at home were favourite to win all three points and a failure to do so will probably end their chances of winning the league (atleast it won’t be in their hands anymore)

Sunderland who are at the bottom of the pile, needed a win or atlease a draw to keep their survival hopes alive and they scored in the last 10 minutes to make it 2-1 and put a full stop to Chelsea chances of winning the league. But was a it a legit penalty ?

Mike dean’s decision to award penalty to Sunderland was influenced by the assitant referee, the question is are the assistant referee’s are there to “Assist” or “insist”