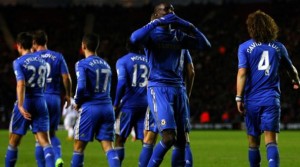 In the English Premier League game to be played on Saturday afternoon we had Chelsea took on Everton in what was a very important game, Chelsea had a wonderful chance of going top of the table and extended their lead to 4 points in the league, but game against Everton was never going to be easy.

Everton came with an intent and they were hard to break down, which they have been this season with resiliant defense under roberto martinez, Everton had a few chances in the first half but Chelsea looked good going forward in patches. Game was 0-0 at the break while looked like it was going top finish 0-0 at Stamford bridge just when Frank Lampard scored in 90th minute of the game to give all three points and put Chelsea in comfortable position going into the later part of the season. You can watch the full match highlights, managers reactions and later the match of the day highlights from BBC Motd.