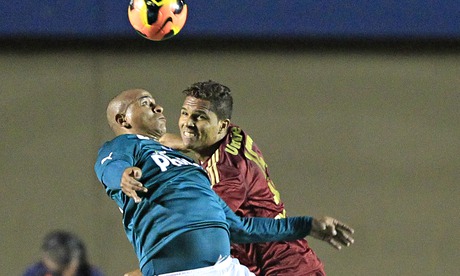 Can you guess which one of these professional athletes has a Body Mass Index that classifies him as obese? Photograph: Bruno Spada/LatinContent/Getty Images

With Diego Costa set to make his debut for Spain against Italy on Wednesday, Luiz Felipe Scolari must sometimes wonder how differently things might have turned out.

After reportedly giving as little attention as possible to Costa when the player joined the Brazil squad for last year’s friendlies against Italy and Russia, the manager had to reach out for the Atlético Madrid striker months later. By then, the 25-year-old had pretty much made up his mind about accepting an offer to switch allegiances to Spain – and the public criticism Big Phil threw at the Brazilian-born player, patriotic card included, reeked of desperation and sour grapes.

Scolari was not only watching one of the Seleçao’s more dangerous rivals at the World Cup gaining reinforcements; he was also losing the only Brazilian forward in top form. Less than 100 days before their opening game against Croatia in São Paulo on 12 June, the tournament hosts are desperately seeking a reliable No9 to fire them to their sixth title and the first on home soil.

It could not be more ironic for a country known for its prolific goalscorers. Ever since the great Ronaldo retired and Adriano succumbed to a routine of parties and excuses, the Seleçao have struggled to find alternatives. Luís Fabiano scored three goals at South Africa 2010 but has faded since his return to Brazilian football. The once promising Alexandre Pato, also a returnee, hasn’t fared any better.

A sign of the paucity is how rarely Brazilian strikers make headlines in Europe theses days, either in terms of transfers or by doing what they supposedly do best. The departures of Lucas Moura and Neymar to PSG and Barcelona respectively were sweet exceptions for fans more used to reading about moves involving defenders such as Thiago Silva, David Luiz and Dante. And the last Brazilian to finish as top scorer in one of the continent’s big leagues was actually an attacking midfielder, Nene, who shared the Ligue 1 honours with Olivier Giroud while playing for PSG two seasons ago. You need to go back to the 2008-9 season to find the last No9 to do it, when Grafite topped the Bundesliga charts as part of Wolfsburg’s title campaign.

On Wednesday, Brazil face South Africa in Johannesburg and Scolari might field the former Lyon striker Fred, a player who hasn’t featured for the team since August and can count on two hands the number of games he has played in the last six months thanks to niggling injuries. Although he has been talismanic since rehabilitated by Big Phil’s return to the job, the Fluminense striker is injury-prone to the point of having a special training regime for club and country. Even more problematic is the choice of deputy: Jo, once of Manchester City and Everton, had some encouraging moments during Brazil’s 2013 Confederations Cup triumph on home soil and in some friendlies last year, but his club form with Atlético Mineiro has not been consistent.

That helps to explain why sections of the Brazilian media have been debating whether Walter, a player who joined Fluminense in January after almost qualifying the minnows Goiás for the Libertadores Cup (South America’s most prestigious club tournament), deserves a call-up. That Walter is known for an expanding waistline and a Body Mass Index that classifies him as obese also serves as a measure of how worried Brazilians are. The scarcity of strikers even led Scolari to tinker with a false nine formation last year using another City flop, Robinho. And that from the same Big Phil who had come back to the job rubbishing any suggestions his Seleçao would ever play in what Brazilian media called a “Catalan system” in deference to Pep Guardiola’s Barcelona (“Give me Messi and I can do it”, joked the former Chelsea commander).

Finding the reason for the drought is another talking point in Brazil. While some commentators and players blame coincidences, there are voices pointing to a failure to keep up with general trends in world football, where more mobile players have been prevailing over poachers. A third view is that Brazilians are paying the price for changes in the philosophy of youth academies, where tactical discipline and competitiveness are taught at earlier stages. “Creativity and instinct are being undermined by a focus on results when kids should actually be worried about developing their fundamentals,” complains the legendary Zico. “Worse, in my opinion, is that youth academies seem to be picking players with focus on size instead of talent.”

Zico himself was an example of how the Seleçao has sometimes dealt with this kind of situation before. Although not a classic striker, the “Little Rooster” is Brazil’s fourth all-time top scorer, with 52 goals in 72 games. The World Cup-winning 1970 squad did not have a No9, with Tostão deployed in the role to open up spaces for Pele and co. One could also point out that Neymar seems to be compensating for the current woes in that position. Since joining the Seleçao in 2010, he is the team’s top scorer, with 27 goals in 44 games.

But some might say this is exactly the problem: already under immense pressure to shine at this summer’s World Cup, the 22-year-old could use some help from his attacking team-mates, especially when opponents are sure to single him out for special attention during the tournament. In the next 98 days, Brazil need to find somebody that can chip in. Desperately.