Brazil and Mexico played out a surprising 0-0 draw, second of the tournament in two days. Now both teams needs a result in the 3rd group games to ensure progress to next round.

Mexcio gave a pretty good go and they could have won the game late in the match with couple od half chances, but it was Brazil as expected who created more clear cut chances but they had Mexican keeper “Guillermo Ochoa” in form of his life who proved to be downfall of Brazil. Now both teams have 4 points on the table and if they can get a atleast draws in their last group games respectively they will progress regardless the results of cameroon vs Croatia.

Brazil will be playing their second group game of 2014 world cup when they take on Mexico on 17th June 2014 and they have a massive oppertunity of qualifying for the knockout stages with a win in this match, Mexico can also achieve the same if they can managed a win against Brazil. Both teams are coming into this game on the back of a great performances in their opening matches.

In the first game Brazil started the match on the back foot when Marcelo conceded an own goal and that was more down to nervous than anything, once Brazil scored the equaliser there was only one winner in it.

Now Scolari will surely go with the same defence line only change in the starting lineup I can see is Willian replacing Hulk who was poor in the first game, Fred is likely to keep his place with Neymar and Oscar supporting him in attack.

Goal scorered Peralta will keep his place and Mexico are highly likely to go with the same starting lineup who played superbly against Cameroon, only thing which west missing was more goals because they created many clear cut chances and made cameroon look a very mediocer team. Hernandez might be used as a sub in second half.

This is the expected lineu of both sides going int oth “Group A” game mexico and brazil. 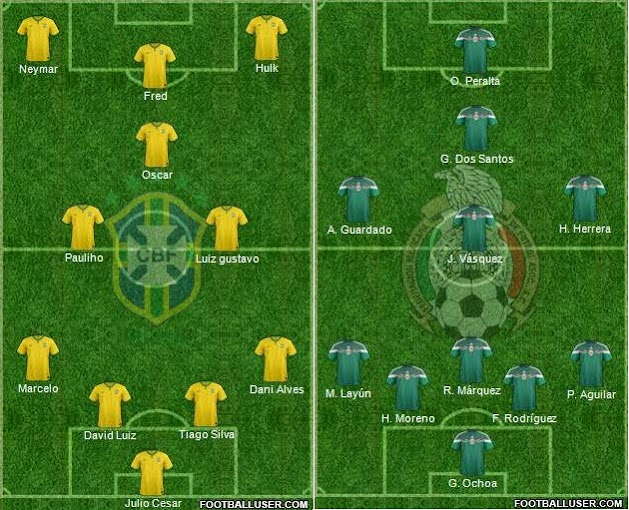 Brazil were lucky to have come away with a 3-1 win over Croatia in the opening match of the world cup, while Mexico outplayed cameroon throughout the game. Mexico are likely to play with 5 men defence and they will have to defend alot more than they did against Cameroon, I feel if they can keep a check on Neymar and Oscar and dont expose themselves on counter attacks they have a very good chance of nicking a point here.

I am going with a 1-1 result, even though there has not been a single draw in the first 10 matches of the world cup.