Brazil were humiliated in the semifinals of 2014 world cup against Germany as they lost the tie by 7-1 which is there biggest defeat in world cup since forever. Brazil coach Scolari came out after the game and took all the blame for the defeat but in the press conference he was in bullish mode and refused to resigned from his job.

We can surely expect quite a few changes in starting lineup from both sides, 3rd place match is used by the participating teams to give players who did not get much of world cup action in the games before. Brazil do has a point to prove while Holland will field a highly changed lineup which took the field against Argentina.

Brazil Team News: I expect scolari to give players a chance who did not get enough action in the world cup so far, with the likes of Jo, Bernard, Maxwell and Ramires getting the starts. It will be interesting to see how Brazil approach this game as they were booed after their 7-1 defeat against Germany.

Holland Team News: Van Gaal is sure to ring quite a few changes, not because his team played badly but just for the sake of getting young players some game time at world stage. We can totally expect Huntelaar, Jermain Lens, Paul Verhaegh, Leroy Fer and probably Tim Krul to start for Holland.

This is how I expect both teams to lineup in the 3rd place match on 12 July, expect a few changes as there is nothing to play for apart from pride. 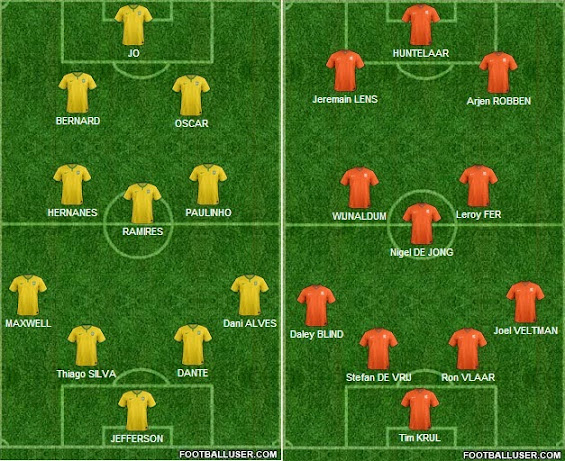 Brazil will find it incredibly hard to get on to the field again after their massive defeat in semifinals. But Scolari will make sure players have something to prove and go out there and put a performance which will put some sanity in Brazil. While Holland are sure to use under strength team which means Brazil will be slight favourites.