In the last group game Brazil need just a draw to confirmed their passage to the next round but they would like to finish first in the group so that they don’t meet Holland (who are likely to finish in Group B) in the knockout stages. Both group b games will be played at the same time kicking off at around 17:00 Local – 21:00 UK time.

Brazil won their opening game against Croatia where they got a bit of helping hand from the referee, while their second group game against Mexico finished 0-0 which leave them having to get atleast a draw to make it to the next round. Cameroon are of course knocked out already and they played two massively disapointing matches. Looking at the performance of first two matches Brazil will be highly favouritesto win this game.

Brazil are likely to make a couple of changes in the starting lineup which took the field against Mexico, Scolari already hinted that Hulk has recovered from the leg problem and he might be handed a start while we might see Ramirez coming on for Paulinho.

Cameroon disgraced themselves in the game against Croatia, first Alex Song getting straight red with his elbow on Croatian player so he is suspended while Benoit Assou-Ekotto and Benjamin Moukandjo head butt antiques might get them out of the starting lineup.

Possible Lineups of Brazil vs Cameroon:

This is how I expect both teams to lineups in the final group game, Assou-Ekotto of Cameroon might be dropped but we will have confirmed lineups 1 hour before kickoff. 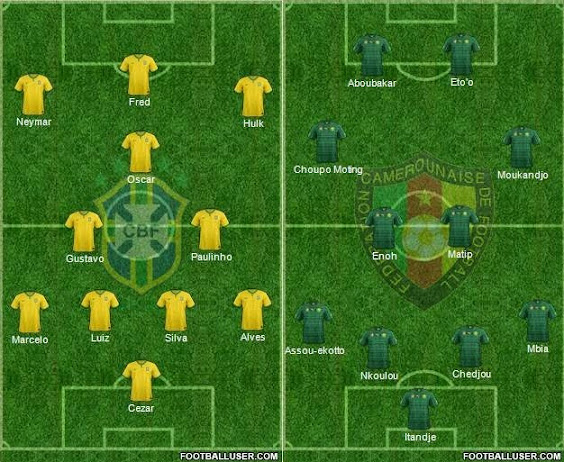 Brazil wins this match all day long, Cameroon has been the most disgracful team of the tournament of yet, its nothing to do with cameroon not having good players but its the matter of passion and discipline which this squad lacks massively. First Mexico outplayed them and they were lucky to have come away with just 1-0 defeat but Croatia tore them apart. Brazil on the other hand played decent football and there is not much of a pressure on them as they might still qualify without winning this game. I am going with a emphatic win for Brazilians.