Brazil played a warm up friendly game against Panama on tuesday night and it was a superb game for the host nation who will be playing their first world cup game against Croatia on 12 June 2014. Brazil started with a full strength side and Neymar started alongside Hulk and Fred.

It was Neymar who scored a magnificent goal to make it 1-0 for the home side which was followed by 1 a goal on either side of the break to kill the game off. Luiz Felipe Scolari slated his team’s training preparation saying that he is not happy the way things are going ahead of this match but he will be a happy man after a comfortable 3-0 win in the warmup game.

Neymar (27th Minute) – A sensational freekick from Neymar, he curled the ball from the edge of the box to the top left corner safely away from the keepers hands to give Brazil 1-0 lead and scored his 31st goal for Brazil. 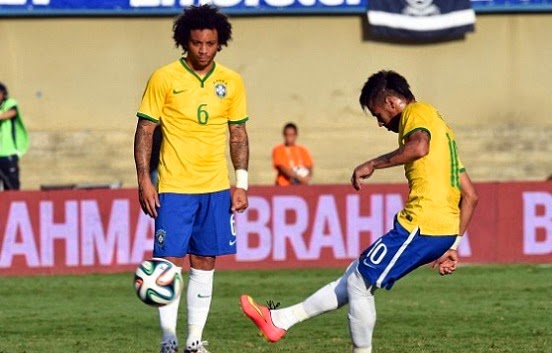 Dani Alves (40th Minute) – Neymar beat a couple of players and went down hoping for a penalty but referee waved play on, ball fell to Hulk on the right side who rolled it to Alves who cut inside and put the ball back of the net with a low hard shot.

Hulk (46th Minute) – A Superb goal where Neymar was involved again. He rolled the ball in the patch of on rushing Hulk who slotted the ball home with easy finish to make it 3-0.