Belgium last qualified for a world cup back in 2002, but in the last few years they their golden generation has turned the table and in 2014 world cup they entered as one of the favourites to go all the way, although on paper they are a much better side than what we saw in the group games. They will be playing again USA for the place in quarter finals where they will face either Switzerland or Argentina. The game will be the last round of 16 tie to be played on 01 July 2014.

[ Live Streaming links for this game will be available at 20:00 BST, which is 1 hour before the kickoff, this page will also be used for Argentina-Swiss game streams ]

Match Preview: Belgium are a very robust team in the middle of the part, they have couple quality players who are not only physican they can play pretty good as well, while their tall keeper Thibaut Courtois is in the form of his life. The back four is not bad either with Vincent Kompany heading the defensive duties, but they dont have natural full backs and that one area where teams with tricky wingers can exploit.

One the other had we have Jurgen Klinsmann’s United States side who surprise many people by qualifying for knock out stages from group of death which included the likes of Germany, Portugal and world cup nemesis Ghana. Matt Besler has been a rock for USA in the opening three games of the world cup while Jermaine Jones and Beckerman provided much needed shield to the back four. One player who is yet to provide a notable performance is Michael Bradley who has been a liability to be honest.

Axel Witsel will be back in the central midfield role while Hazard, Mirallas and De Bruyne will start in attacking midfield roles supporing Lakuku upfront. Jozi Altidore is still doubtful for this game and we can expect Clint Dempsey to lead the attacking lineup for USA. 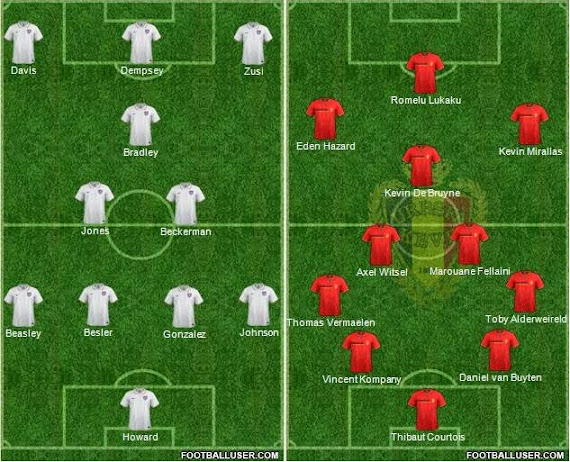 World Cup has been full of surprises and this game has upset written all over it, Belgium are far superior team than USA but the they are not playing to their full potential. On the other had soccer audiance in USA has increased dramaticly and the Germany-USA game was watched by 1.7 million people online on just ESPN mobile streaming and many more millions watching on TV in USA.

Their loss against Germany was not a bad result eithee it was tricky game where they did not had to win so got caught in two minds whether to push forward or keep the defensive shape. Now its a knockout stage and a total different ball game. I think USA can nick this one if their defense bring their A game, I can see this game going just the Ghana-USA group match.