USA’s round of 16 clash against Beglium was another hard fought game where both teams had their chances with contrasting styles, USA sitting back and trying to catch Beglium off guard at counters while Beglium kept possession and created number of chances only to be let down by their finishing in the end. 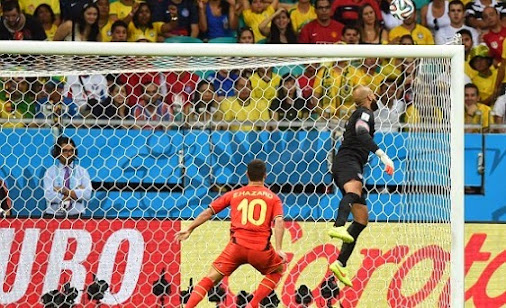 Beglium had more of the ball and they created the better chances in the first half but United States looked dangerous when ever they launched a counter attack. The game was 0-0 at the break just like earlier Argentina-Swiss game but it came to life in the later part of the match where Belgium started to control the game better as USA players got stretched and tired. This was Begliums fifth goal-less first half in the world cups which goes to show they are leave it late most of the time.

Belgium made the first change in the 2nd half while Dries Mertens was replaced by Kevin Mirallas who came on and made USA defense work a bit harder. After the 70th minute USA players looked tired and just hanging on to the match as Beglium pilled the pressure and it looked like Beglium is going to score anytime in the game.

USA somehow managed to get through the first 90 minutes without conceding with Jurgen Klinsmann making his second change of the night with Chris Wondolowski coming on for Graham Zusi. The game finished 0-0 at the break but not before USA had the best chance of the when Wondolowski missed a sitter in dying moments and Klinsmann could not believe he missed it.

It was Kevin De Bruyn who opened the scoring in first half of extra time when Lakuku came in for Divock Origi, and a few minutes later Belgium made it 2-0 with Lakuku scored with a good solo effort. At at the end of first half extra time game was 2-0 in Belgium favour and all seem done and dusted.

In comes Julian Greece for Alejandro Bedoya and he scored wonder goal for USA and became the youngest ever player to have scored for USA in world cups.