A dead rubber of a game if we look at the both team’s position in the group, Belgium are through to the next round having won two of their opening matches while South Korea has a very slim chance of making it to the next round and that is if Russia and Algeria play out a draw and South Korea beat Belgiun by ore than 3 goals. But we can safely sawy that either either Russia or Algeria has the better chance of getting out of this group.

Both teams are known as “Red Devils” and going into the match Korea will be somewhat disappointed their performances so far in the competition. Beglium of course have first place to play for and if they can get a draw they are sure to finish top of the league and will avoid Germany who are most probably will finish first in their group.

Belgium coach, Marc Wilmots will be giving Axel Witsel rest in this game because he is just another yellow card away from suspension, while Toby Alderweireld and Vincent Komapany are also in the similar situation and one of them will be benched.

South Korea on the other hand will have to go all out and not only win the match but win it style, so we can expect Korea to go with Ki Sung-Yueng former Arsenal striker Park Chu-Young upfront who will be looking for early breakthrough.

This is how I expect both teams to lineup and once the confirmed team sheets has been released we will update them right here. 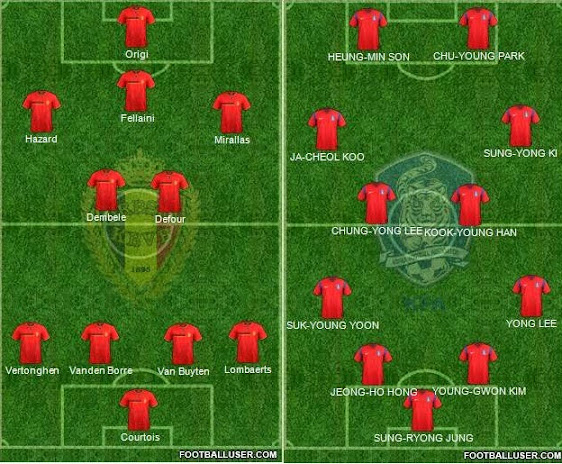 Korea has to be carefull to not expose their defense in case of going all out attack, Belgium do have some great players who can really hurt them on the counter attacks. From what I have seen in the opening two matches Korea do have good players but they lack that final bite (not the one of Suarez). They are really poor in the final third and I am going with another comfortable 2-1 win for Beglium.