Belgium will take on Russia in their second group game with an oppertunity to book their pace in the knockout stage if the managed to beat Russians who must get a result in this game to keep their hopes of qualification from this group. The game is the first kickoff of sunday, 22 june 2014 to be played in Rio De Janeiro.

Belgium confirmed their place in last 16 of world cup

Belgium came out pretty strong against Russia and got a massive win which put them in the last 16 of the world cup, Russians were poor and Fabio Cappelo will be disapointed with the two games they played so far. Next up Russia play Algeria and they winner of that match is going to next round.

Belgium came from behind to beat Algeria in their opening group game, big things are expected from this Belgium golden generation who have a very competitive squad which can go all the way. Though they struggled in the opening half of their first game, conceding a goal and failed to put Algeia under pressure. But they came good after break who two quick goals turned things around.

Russia on the other hand played out a 1-1 draw against South Korea but they looked very defensive unit and did not create enough chances to give us a feeling that they mean business. South Korea had them under the sword throughout the game though Fabio Cappelo side came from behind to draw level 1-1.

Dries Mertens and Marouane Fellaini came on from the bench to score goal piece which lead to Belgium victory and I expect them to start the game against Russia replacing Mousa Dembélé and Nacer Chadli.

Alan Dzagoev did not start the game against South Korea but when he came on as a sub he looked a quality player, I expect him to start aginst Beglim.

This is how both teams starting lineups might look come the kickoff time, we will update 1 before the match with comfirmed lineups. 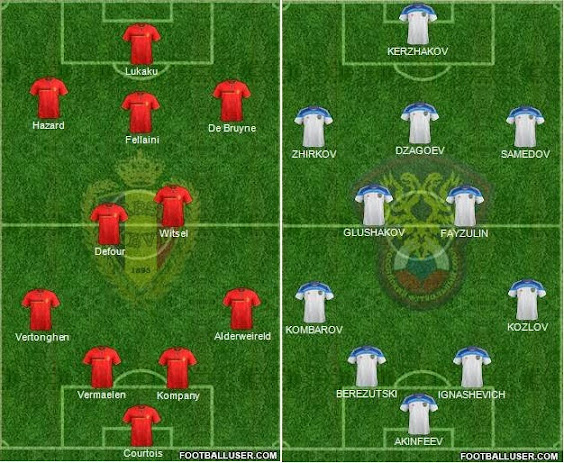 Belgium can book their place in the final 16 with win over Russia, but Russians can overtake Beglians in the group if they can managed a win in this game. Stakes are higher and big players from both sides has to come good. Russia looks a very defensive unit under Cappelo and I can see this game ended in a draw.