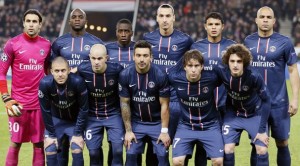 In the champions league round of 16 matches first leg played this midweek we had French Champions Paris Saint Germain taking on german side Bayer Leverkusen, in Germany. The game was a total mismatch as PSG ran riot playing away from home and scored three goals before the break, killed the tie and have already one foot in the quarter finals of the CHampions League.

Matuidi scored the first goal of the game in just 3rd minute of the game to give PSG lead, Swedish striker Zlatan Ibrahimovic scored two in quich succession before the break to make it 3-0 for PSG, his first goal came from spot kick while his 2nd was a well taken striker.

To make matters worse for the home side, Emir Spahic got his second yellow of the game and got sent off, which means he will miss the 2nd leg, but since the result is pretty much already done and dusted it won’t have too much impact on Leverkusen chances.