Barcelona’s Most Expensive Signings In History

FC Barcelona are one of the biggest clubs in the world and to keep up the pace at the top of the league against arch rivals Real Madrid they consistantly spend big bucks to have best players in their ranks. Today we take look at 10 of the most expensive transfers in the history of Barcelona. 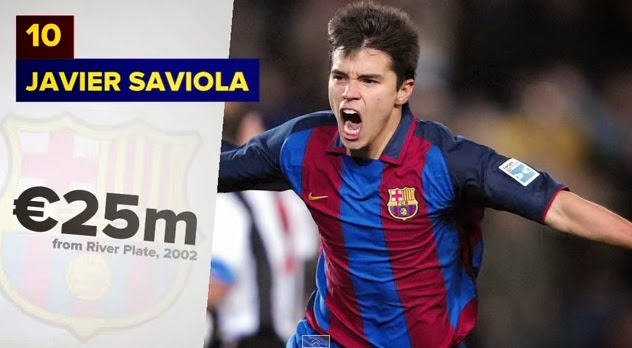 Argentina forward was once consider one of the best up and coming centre forwards in the world and Barcelona paid 25 million euros to River Plate in 2002 for the services fof Javier Saviola. Who struggle to adjust in Barcelona playing style and moved to several clubs in Spain including Real Madrid. 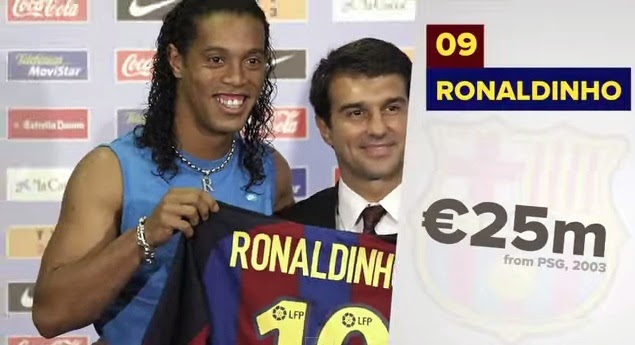 Probably one of the greatest footballer to have graced european football is Ronaldinho who came to Barcelona from Paris Saint German back in 2003 and this was the transfer which laid the foundation of recent Barcelona success. He was magical on the ball and his stay in Barcelona was a complete success. He later moved to AC Milan once Lionel Messi started to take control of the Barcelona’s forward line. 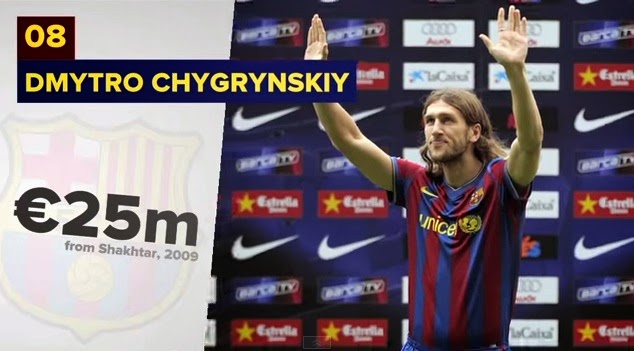 Now this was a big flop signing for Barcelona who bought Dmytro Chygrynskiy from Ukrainian side Shakhtar Dontesk in 2009 but he failed to get starting place in a competitive Barcelona back four. Was later sold back to the ukrainian club for half the fee. 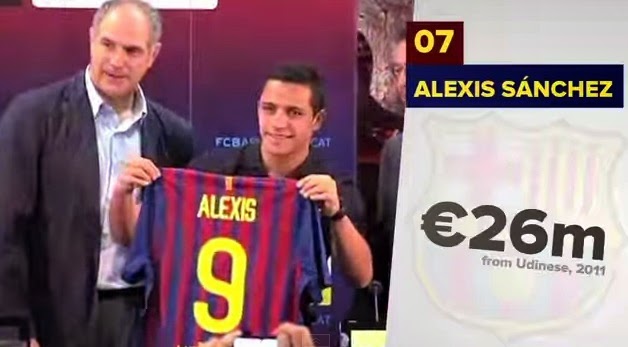 Chilian forward had couple of great seasons with Italian outfit Udinese and when Barcelona came calling it was hard to resist and he joined Barca in 2011 for €26 Million euros. He has been playing a second fiddle role in Barcelona setup with Pedro and Messi playing upfront most of the time. 2013-14 season was his best as he scored 20 goals. 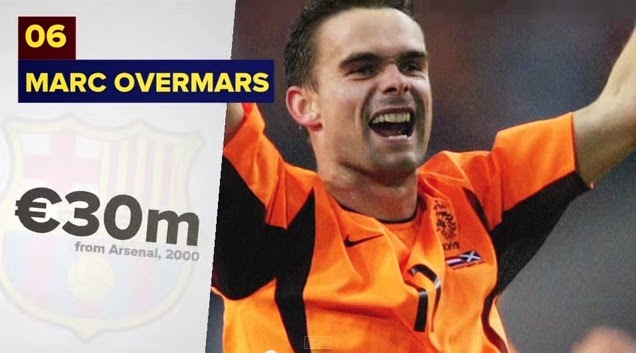 Dutch winger Overmars was one of the fastest players in the world at his peak and Barcelona paid a record €30 Million fee for legendry dutch forward he had a several very good seasons with Barcelona from 2000 to 2004. 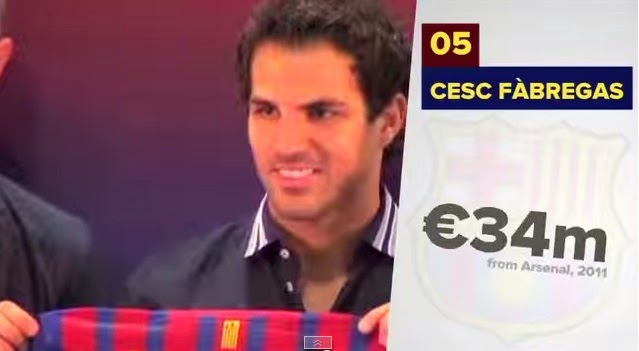 Fabregas is the product of Barcelona youth academy but they let him go to Arsenal before he could reach first team football in Barcelona, Fabregas under Arsene Wenger flourished and had 2-3 very good seasons and his desire to play in his native club took him back to Barcelona in 2011 where he was suppose to take over from Xavi. 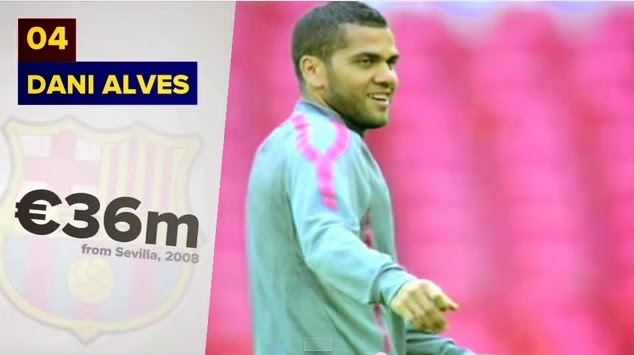 Barcelona paid 36 million euros to spanish club Sevilla for the servies of Dani Alves who came with a reputation of attacking full back and he had fair share of success with Barcelona setup and his partnership on the right hand side with Lionel Messi is superb. 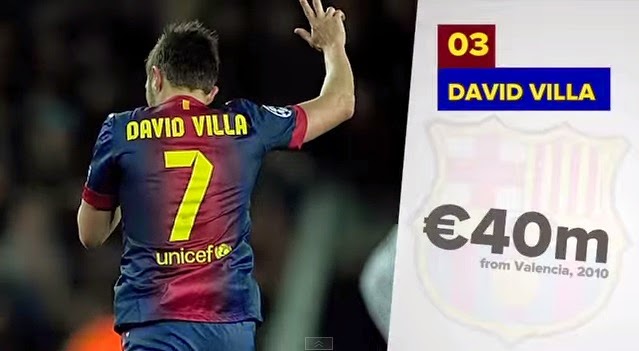 Valencia striker David Villa was one of the hottest forwards in world football at the time when he signed for Barcleona in 2010. He was signed to replace Zlatan Ibrahimvoc who had left the club after one season. Villa played big role in guiding Barcelona to Champions League victory in 2011 against Manchester United. 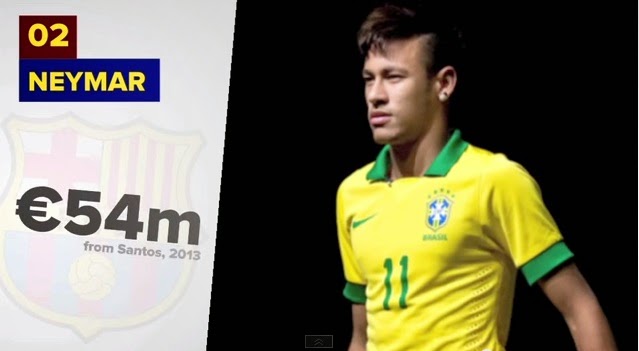 From the record books we ca see that Barcelona only paid 54 Million euros to Santos when they signed Neymar but there were other payments made to third parties which were not disclosed. So we can only state €54 Million which was the official amount from both clubs. Neymar did not had the best of 2013-14 season but he will be looking to shine in the coming years. 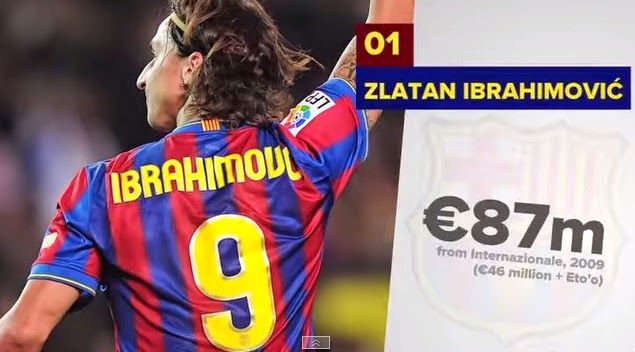 The most expensive Barcelona player was Zlatan Ibrahimovic who Barceloan signed from Inter Milan with a swap deal including Samue Eto’o +  46 million euroes. Although he had a decent first season in terms of goals he was not happy playing second fiddle to Lione Messi and he left the club to join AC milan a year later.