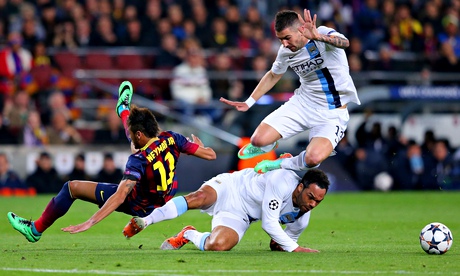 Given the necessity for his side to score at least two goals to progress, it was no great surprise to see Manuel Pellegrini decide that Sergio Agüero should start a game of such magnitude. But the hamstring problems that have plagued Agüero of late and led to him missing the first leg did not to look have completely cleared up in the past few games and it was the same again tonight. The Argentinian was anonymous in the first half and City could ill afford to carry a player on such a demanding night. The problem for Pellegrini was that the goals appear to have dried up for Álvaro Negredo and Edin Dzeko recently, with the latter particularly profligate in the FA Cup quarter-final disaster against Wigan on Sunday. Pellegrini went for Agüero with the hope one flash of his devastating finishing would change the tie. It was a gamble that backfired, and the City manager replaced him with Dzeko at half-time.

2 Touré brought down to size by Barcelona’s brilliance

Samir Nasri said after City’s Capital One Cup triumph that if Yaya Touré was Brazilian he would be lauded as the best in the world, but perhaps the Frenchman was forgetting about a trio of Spaniards. Barça’s fabled central triumvirate of Xavi, Andrés Iniesta and Sergio Busquets have seldom been short of plaudits, but it was their continued excellence that led to the Catalans feeling Touré, often played as a defender when at the Camp Nou and did so in the 2009 final win over Manchester United in Rome, was surplus to requirements when he was sold to City in 2010. Touré had a point to prove to his former side and was given the central attacking midfield role he craved when he played here, but the Ivorian could not replicate his domestic form.

3 A new centre-back is a priority for the summer

Martín Demichelis has not proved the most popular of Pellegrini’s signings, even more so after his first‑leg indiscretion gave Barcelona the initiative in this tie. His red card for bringing down Lionel Messi ensured he could not figure tonight, and many City supporters would have seen that as a bonus. But how his replacement, Joleon Lescott, struggled in his stead. He perhaps should have emulated Demichelis in conceding a penalty and being sent off early on, and was eventually left floundering by Messi for the opening goal. Only another magnificent performance by Vincent Kompany alongside him kept City in the tie for so long. Demichelis and Lescott are not the answer, and neither of Matija Nastasic or Dedryck Boyata has entirely convinced either, while Micah Richards seems permanently out of favour. City were believed to be close to bringing in Porto’s impressive Frenchman Eliaquim Mangala in January. He will be expected to arrive this summer. Kompany needs company.

A fixture in the Barcelona No1 shirt for almost a decade, Víctor Valdés has decided to bring the curtain down on his Camp Nou career at the end of the season when his contract expires. While there are many of Barcelona’s star names who have a bigger billing than their goalkeeper, his brilliant save to turn Dzeko’s header over the bar when the score was still 0-0 showed why he has been so immovable for so long. England is thought to be a possible destination after the World Cup – and there will be no shortage of offers for a 31-year-old on a free transfer.

5 Better than Mancini era, but City are still beginners

After successive exits at the group stage, now the last 16. City have made progress of sorts in Europe’s elite competition this season, but it is unlikely to be enough to appease their ambitious, deep-pocketed owners. While the European embarrassments of the Roberto Mancini era were at least avoided, City still appear to be novices on this stage when their expenditure and their squad demand that they be thoroughbreds. They will be back next season, and will have learned much from these two games, not least that errors of judgment, however slight, such as that shown by Demichelis in the first leg can be so costly at this stage. They were pitted against a Barça side who are not vintage and were in a troublesome spell of form, but remain at a higher level that City still aspire to.