Austria failed to qualify for the FIFA World Cup 2014 as they lost their last group game against Sweden but they will get a new Puma kit for the 2014 year as Puma are going to release many kits for the national sides. Puma’s new evoPower kit templates were leaked a week ago and this Austrian home kit as well as Italy world cup kit and czech repbulic will be designed by using the same kit template from Puma.

The following pic is the new leaked home kit of Austrian Nations side. 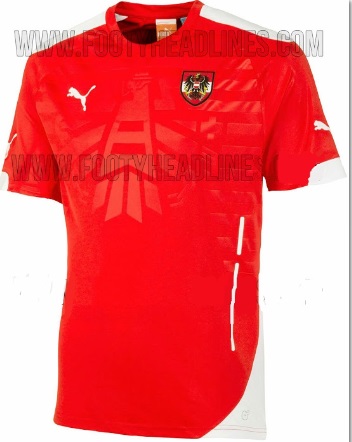 Austrian new kit for the 2014 international matches comes in all red colour with white application and design on shoulder and sleeve cuffs. There is also an iconic front design on the kit which is kind of faded in the red colour and we can call it watermark which shows the traditionan austrian eagle design. While we have small round classic collar of the kit and there is white big line on the shoulder plus a slim line on the side of the kit in white colour.