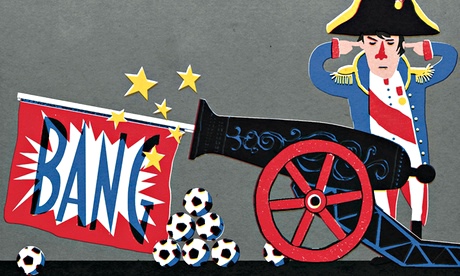 It is a scene that could be soundtracked by David Bowie’s Always Crashing in the Same Car. Arsène Wenger biting hard into his lower lip after an anaemic defeat: Arsenal fans suffering a painful version of March Madness as another season without silverware looms; the bookies easing the Gunners from contenders to stragglers.

Wenger called Saturday’s defeat at Stoke City a “massive setback”. Their next Premier League defeat is likely to be a death blow for their title hopes. If fatalism has a scent, Arsenal supporters wear it like eau de toilette. But you cannot blame them. They have been here before.

What makes it worse is that when it came to the crunch Arsenal used to bite down hard. From 1998 to 2006, when the trophies flowed as easily as the football, Wenger’s side had a higher average points tally between March and May than from August to February in seven of nine occasions.

This season they led the league almost continuously from mid-September to late January. But that run, albeit impressive, was misleading. As Prozone’s Omar Chaudhuri points out, the Gunners have had the easiest schedule in the Premier League, based on the average points per game of their opponents, adjusted for home and away fixtures.

Chaudhuri makes another point: when you look at the location and type of shots Arsenal have attempted and conceded they are scoring more and letting in fewer than expected of a “typical” team from the same locations. Their points tally has exceeded their general play.

The impression of Arsenal withering under pressure, of allowing another title to slip away, is unfair. That does not mean their fans’ frustration is not understandable, given the price of season tickets and the lack of trophies. Their club has turned into the equivalent of the speed dater who repeatedly gets told he has a nice personality but ends the night without a phone number.

But arguably Arsenal’s season has panned out better than expected. Last August we knew they were missing a top striker and were fourth favourites for the Premier League. That is true today, too. But some of the questions raised back then about their goalkeeper, defence and central midfield have been answered.

Wojciech Szczesny has made fewer kamikaze charges and clumsy errors and his save percentage has improved too. The defence has conceded the second fewest goals in the Premier League. And Aaron Ramsey had gone from boo-boy to contender for player of the year before straining his thigh.

In fact Arsenal have been unlucky with injuries. Ramsey, Theo Walcott and Alex Oxlade-Chamberlain have made only 29 Premier League starts this season and played together only once. If they had stayed fit, where would Arsenal be now?

We cannot know, of course, but the loss of Ramsey and Walcott has certainly wounded them. Ramsey’s average goals per 90 minutes puts him 16th in the Premier League while he is 10th in the assists charts per 90 minutes played. And while Walcott is still seen as an eager ferret who is just as likely to do a thrilling loop-the-loop as scamper down a blind alley, it is worth remembering that he was Arsenal’s top scorer last season with 21 goals. And in 2013-14 he is fifth in Premier League for average assists per 90 minutes (Pablo Hernández, David Silva, Wayne Rooney and Luis Suárez rank higher) and 13th for average goals per 90 minutes, above Rooney and Olivier Giroud.

Where Wenger’s critics are undoubtedly right is in his lackadaisical, almost quixotic, approach to bolstering his strike force. The average goals total for the top scorer at a Premier League winner since 2001-02 is 23 goals. Giroud performs a valuable job but he has scored only 12 in the league. Wenger has his fingers on most levers at the Emirates and has a prudence that is in many ways admirable. But it is one thing to be controlling and judicious, another to bathe in inertia.

Of course Arsenal’s season is not over. They are still in the FA Cup and, by a thread, the Champions League. In the Premier League they are four points behind Chelsea, whom they face in three weeks’ time. They are also level on 59 points with Liverpool, a side everyone is drooling over. The title is still up for grabs but their next league games loom like Himalayan peaks: Spurs away, Chelsea away, Manchester City home, Everton away.

They could do worse than gaze back at the past for motivation. In 2001-02 Arsenal were third at the start of March, with 54 points from 27 games, before completing a glorious 13-game winning streak brought them the title by seven points. But that double-winning side had David Seaman in goal, Sol Campbell and Tony Adams in defence, Patrick Vieira in midfield and Dennis Bergkamp and Thierry Henry up front. It did not have only strength, pace and quality to burn. It had backbone too.