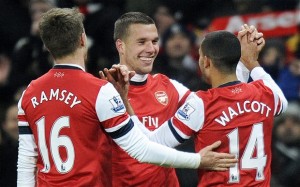 In the FA Cup quarter finals Arsenal took on Liveprool, whom they got whooped a week before by 5-1 and it was a perfect game for them to take their revenge. Arsenal fielded quite a strong side and looks like Arsene Wenger do care for the silverware now as this is their by far the best chance of winning somthing.

Ox-Chamberlain scored the first goal of the match in jsut 16th minute and continued his recent good run of form after injury lay-off, Liveprool struggle to get the grip on game which they had in previous meetings. They did creat a few chances and for them FA Cup was their only competition where they had a chance to win somthing.

Game was 1-0 in Arsenal favoure at the break, but German internantional Lukas Podolski made it 2-0 just after the break and looked like game set and arsenal in semifinal against city, but Liverpool won a controversial penalty which was converted by Steven Gerrard to setup a grand stand finish.