Arsenal announce new contracts for Per Mertesacker and Tomas Rosicky 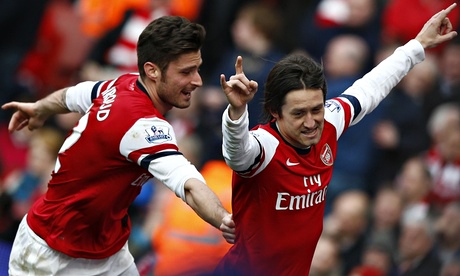 Arsenal have been given a double boost after announcing both Per Mertesacker and Tomas Rosicky have signed new contracts with the club.

The Germany defender Mertesacker, 29, has established himself as a key member of Arsène Wenger’s first-choice back-four, playing alongside Laurent Koscielny for much of the campaign.

Rosicky also continues to form an integral part of Wenger’s title-challenging squad despite the Czech Republic midfielder being 33 and the manager is pleased to have both players staying at the Emirates Stadium.

“We are delighted that Mertesacker and Rosicky have committed their futures to the club,” he told Arsenal’s website. “They are players of exceptional quality and experience, and have consistently proven themselves at the highest level. There is a great feeling of togetherness and belief in the group and this news will only help to strengthen this further.”

Mertesacker, signed from Werder Bremen in 2011, has started all but two of Arsenal’s Premier League fixtures so far this season and – with 95 Germany caps to his name – his experience has proved invaluable.

The defender said signing a new deal was a simple decision to make as he has a passion for the club. “It was easy for me to commit myself to the club,” he said. “I have been here for two and a half great years and feel I have great support from everyone at the club and the fans. I’m really looking forward to having more years coming up with this fantastic club. We have a great team here and we all want to do our best to win trophies.

“I have become a real Gunner … I am truly thankful to the club and all the supporters for the time I have had here so far. And today I am deeply proud to have extended my contract with Arsenal. I’m proud to be a Gunner.”

Rosicky added: “I’m very happy that I’m staying at the club,” he said. “I’m proud that I’m still here after a long time and that it still continues. I’m glad I’m here at Arsenal and we’re all trying our best to win trophies for the club and our supporters.

“Ever since I arrived at Arsenal, I have always felt that I’m at the right place where I want to be. I still feel this way now and I’m proud that after such a long time I’m still here and will continue. One big factor is that I want to win the league with Arsenal.”

The club are set to announce more good news this week, with Aaron Ramsey about to sign a five-year contract that will make the 23-year-old their second highest paid player, after Mesut Özil.