Lionel Messi has finaly come to life on international stage as he single handedly guided a very average Argentina side to the knockout stages with four superbly taken goals. His team will come up against Switzerland in the first knockout game and the winner of this match will be taking on either Belgium or USA. The game will be played.

[ Please check back 1 hour before the scheduled kickoff (16:00 Uktime) to get the live streaming links, we will have alternative links for the game as well ]

Argentina has rely big time on Lionel Messi form and as the stats suggest from the opening three games, Argentina will go as far as Messi can take them. Apart from couple of other noticable performances like Di Maria and Javier Macherano nothing is clicking for Argentina. Their cross from the wide areas has been poor and almost every goal so far they have scored came through Messi.

Alejandro Sabella do have some selection headechs as Sergio Aguero is doubtful for the match while Gonzalo Higuain is not looking in good form either, but PSG winger Lavezzi player quality football once he came on against Nigeria.

Switzerland on the other hand shrugged off their massive defeat in the hands of France by beating Honduras comfortably with a 3-0 win where Xherdan Shaqiri scored a hattrick to calm down his critics. Switzerland coach ottmar Hitzfeld, brought in Fabian Schär for Philippe Senderos in central defence against Honduras and he might persist with him against Argetnina as well.

Steve von Bergen exit means the cenrtal defence will be a make shift with either Senderos or Schar starting alongside Jourou. Argentina might bench Aguero even if he is deemed fit enough to play and Lavezzi might get a start alongside Di Marka, Messi and Higuain in the attack with 4-2-3-1 formation. 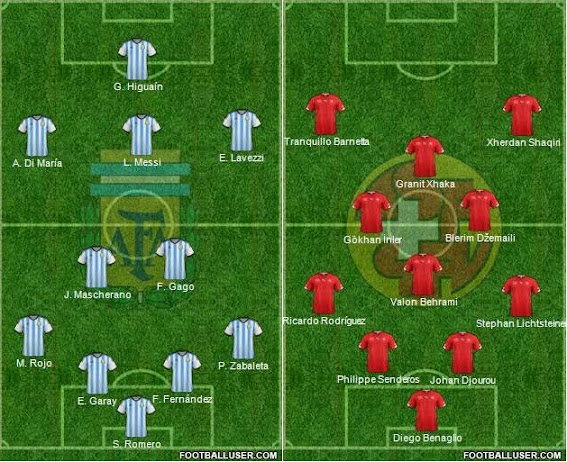 Dont take Switzerland’s result against France to judge this team, they are very solid defensively and will provide a much stiffer test for this under performing Argentina side in the first knockout round. Switzerland has to come up with a plan to keep Messi quite and try to catch them on counter attacks.

Argentina on the other hand are heavily reliant on Messi so far in the competition and as the things stand I can see this game going down to the wire but Argentina to go through on extra time or penalties.