A win for Lione Messi and co can book their place in the first knockout stage when they take on Iran in the 2nd group game in the world cup. Argentina of course defeated Bosnia Herzegovina in their opening match by 2-1 while Iran held of the challenge from Nigeria to 0-0, the game will the first kickoff on Saturday at 13:00 Local time.

With no disrespect to Iran, but Argentina are on a different level altogether, Lionel Messi scored his 2nd world cup goal in his career and if he is anywhere near fit Iran will find it very difficult to contain him. Iran however played reasonably well to get a draw in their opening fixture and they would have to win atleast 1 more game in the remaing two matches to have any chance of making it out of this group.

Argentina are likely to make a couple of changes, Fernando Gago might start in place of Maxi Rodridgues while Higuin might be starting the match alongside Messi, and Aguero upfront. 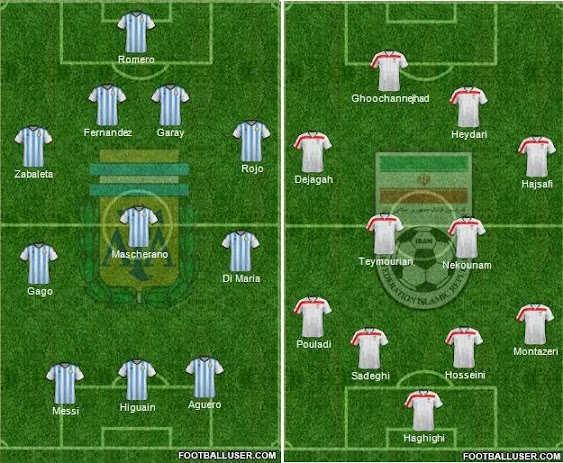 Iran are also likely to field a unchanged lineup which took the field against Nigeria. It will be interesting to see what setup Argentina use as Iran dont pose much of a threat going forward so playing with three strikers upfront is a highly likely.

On paper Argentina are in with a goal fest, but the games are not played on paper and this World cup is certainly turning out to be a surprise package with every team going into the match against anyone with a chance. Australia almost nicked a point or even a win against Holland, Spain are already out, Uruguay suffered a setback against Costa Rica while portugal struggled against Germany. But I am going with a 4-1 scoreline for Argentina. I think Messi might run riot with the firepower they have.