Lionel Messi and co has qualified for the 2014 world cup quarter final which will be against Belgium on Saturday afternoon 05 july 2014 in Estadio Nacional, Brasilia. The winner of this match will play against Holland or Costa Rica in the semifinal of world cup. This will be the early kickoff starting at 13:00 local time.

Argentina had to work really hard in the round of 16 clash against Switzerland where match went to extra time and it took a late goals in the 2nd half of injury time from Angel Di Maria to book Argentina’s place in quarter final against Belgium. Lionel Messi has almost single handedly guided Argentina this far and he clearly playing a level above his team mates, but against Belgium whole Argentina side has to come good and perform at a level where they can match Messi’s brilliance. Belgium on the other hand has been unvoncincing throughout the competition, their win against USA came in the extra time but they had to with-stand massive pressure from Americans.

Argnetina do have a selection problem in the attacking third of the team while Higuain, Aguero and Lavezzi has failed to perform. Aguero is still a doubt for quarter final tie as he is struggling for fitness but should be fit and might start alongside Messi and Higuain in three man attack. Their possible starting lineup is discussed below.

Belgium played decent football against USA but their finishing was poor only when Romelu Lukaku came on as a sub at the start of first extra time and he made the difference by creating one goal and scoring the 2nd. I expect him to start in this game and below is the expected lineups of both sides.

This is how I expect both teams to lineup on saturday’s quarter final match in Brazilia. We will update the page with confirmed lineups 1 hour before kickoff. 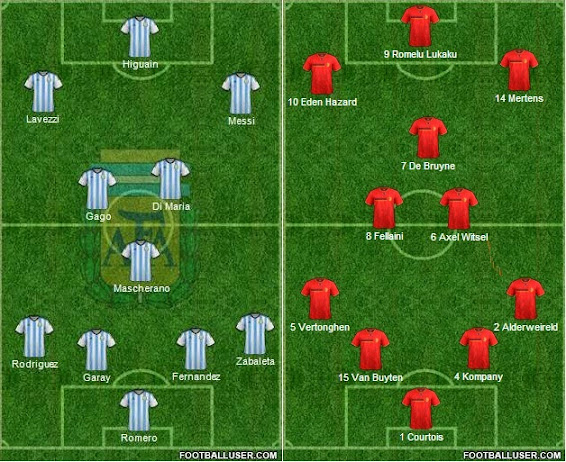 The two sides have meet 4 times in the world cups before and Argentina has won 3 times while Belgium came out winners once. out of 14 goals scored between the two teams, Argentina has scored 10 of them. So after record breaking group stage in terms of goals, we had fewest goals in normal time throughout the 8 matches in round of 16 and I expect it to continue with teams emphasis more on their defensive play that attack.

Argentina’s defense has been question by Switzerland in the previous game and Belgium can hurt Argnetina from the wings with pace and power of Eden Hazard and De Bruyn but Belgium defense will have their handsful of Messi and if Higuain, Di Maria and Aguero bring their best game.

I am going with another staller performance from Messi and he will be the difference between the two sides, So my predictions for the match are Argnetina 2 Belgium 1.