The summer carnival in Brazil ended last night as Phillip Lahm raised the FIFA world cup at Estadio do Maracan,Rio de Janeiro. In the last decade Germany had been hovering around the iron throne of football but finally Joachim Loew’s boys managed to get their hands on the golden trophy .After 24 years Germany is again the world champion thanks to their astounding performance in a world cup which was full of drama, crammed with goals, thronged with rapture and nail biting finishes. Many of the seriously tense football matches were decide on penalty shoot outs. This is where millions of dreams shattered due to either slight error of some players or some might say betrayal of luck.

A total of 36 penalties were taken, out of which 26 were scored.8 penalties were saved ,one was wide and one hit the post. All these 4 matches were decided on original 5 penalties and in no match extra shootouts were needed.

Both Netherlands and Costa Rica remain involved in penalty shootouts twice and both of them won their first one and lost the second one. No team other than Argentina has a success rate of 100 % in these penalties. Here is a quick glance on these encounters.

Players who missed the penalties: 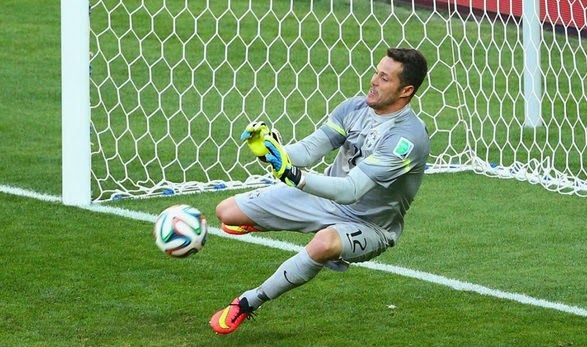 Till the 120th minute match was tied with the score line frozen on 1-1. Scoring rate was pretty less but at the end what mattered was a bit of a luck and a moment of brilliance by Julio Cesar who saved a couple of penalties to take Brazil safely home. Brazil went on to win the penalty shoot outs with a 3-2 lead . 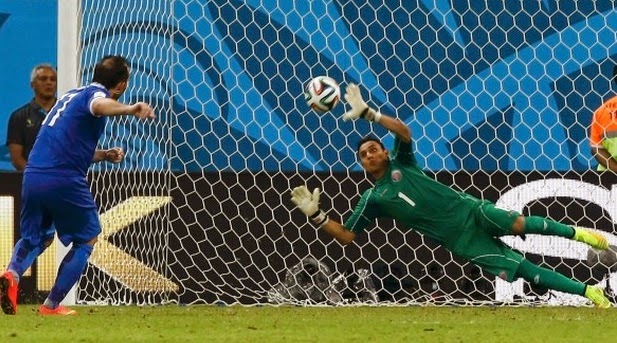 Greece found, Keylor Nevas, who finished the FIFA world cup with three clean sheets in five games ,too hot to handle. Nevas continued impressing everyone and saved one crucial penalty to see Costa Rica through to the next round. Following his performance in WC, Nevas caught the eye of many clubs including the giants like Real Madrid.

Costa Rica couldn’t get the second time lucky in the semis because of the 6 feet 4inch minute Dutch substitute ,a card which Van Gall kept up his sleeves until the very last 120th seconds of Extra Time, Tim Krul.Van Gall brought him on and gave the impressions as if he is a penalty shoot out specialist. Whether he was one or not before the penalties, is debatable but after the penalties he transpired out to be one hell of a penalty specialist as he saved two penalties and Dutch team qualified for the Semi Final with a 4-3 score line.

120 minutes of gameplayed, score line 0-0,Tim Krul sitting on Bench, Van Gall with no substitutions up his sleep, two Dutch players refusing to take the first plenty kick, Dutch goal keeper who has never saved a single penalty in his carrier is on the pitch. This is the situation we are talking about so no prizes for guessing who won this game. Argentina won this match by a score line 0f 4-2.

Argentinian Goal keeper Romero, nick named “Chiquito” which means little proved to be much bigger challenge then what Netherlandswould have hoped. He saved two penalties resultantly Argentina won a ticket for Rio only to loose from Germany in the final.