A must win game for both sides as South Korea try to get their first win in the 2014 world cup, While Algeria are looking for their first point of the competition having lost against Beglium in the opening fixture. This match will be the 2nd kickoff on Sunday and it will be played at Estadio Beira-Rio in Porto Alegre.

South Korea played with so much class against Russias, they had them under pressure throughout the game and just when they took the lead through Keun-Ho Lee in 68th minute of the match it looked like all three points for Korea, but Russia turned things around and got back on level terms minutes after Korean goal. That draw leave Korea with no margin for error and one would think they need all three points to get through from this group.

Algeria must win this game having lost against Belgium and a defeat will most certainly end their world cup dream for another 4 years atleast. Check out the team news and possible starting lineups of both sides.

Ha Dae-sung has been ruled out from the next game, while the super sub from russian game who came on and scored Lee Keun-Ho is likely to starting against Algeria.

There are no injury worries for Algeria team ahead of their clash against South Korea, they are likely to go with the unchanged lineup.

Possible Starting Lineups of Both Teams:

Algeria to go with unchanged lineup while South Korea are likely to make atleast two changes, we will confirm the lineup 1 hour before kickoff. 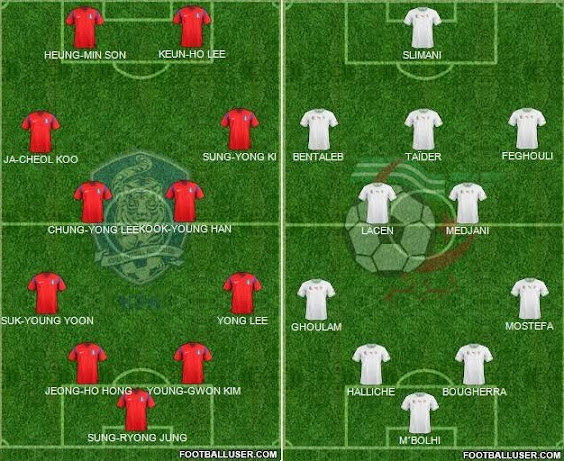 Algeria gave Belgium a real tough challenge and they looked the better side for most part of the game only to be undone by a later surge by Beglium. South Korea also played well against Russia. So Korea-Algeria game is anybodys guess specialy the way results has gone in this world cup. Algeria team has something about them and I can see a narrow and possibly a late win for Algeria.