Algeria sealed their qualification in the playoffs of african world cup qualifiers by beating Burkina Faso in the 2nd leg while coming from behind after defeat in the first leg. Algeria’s coach is Vahid Halilhodzic who build Algeria’s success on a very solid defence which is hard to break down while upfront they have couple of big centre forward who can nick a goal against any time. Lets take a look at complete profile of Algeria Squad. 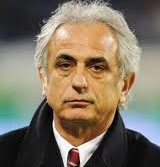 He was part of Yugoslavia team in his playing days now at the age of 61 he will coach Algeria in the world cups having successfully guided them to big event. Most recently he helped Ivory coast to reach world cup 2010 but resigned before the world cup got underway. Halihodzic brings Discipline‎ to the team and it will be big test of him as well.

Key Players and the one to watch out for:

Sporting Lisbon striker who is quite a handful in the final third. Slimani’s 5 goals in the qualifying rounds were the key for Algeria to get narrow wins. He is tall and powerfull in the air will be key to Algerias chances in world cup.

This young boy can play, brought up in france but is eligible to play for Algeria because of faily roots. Inter Milan recently bought him for around $7 million. He holds the key for Algeria to perform more than what people expect of them.