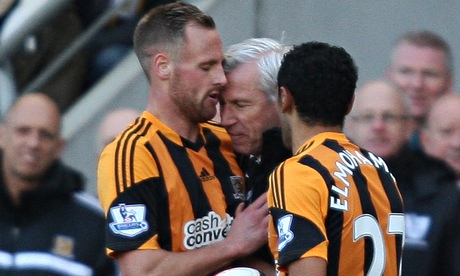 The Newcastle manager Alan Pardew is facing a fine and stadium ban for his head-butt on Hull City’s David Meyler. Photograph: Paul Mcfegan/Sportsphoto/Allstar

Alan Pardew has been charged by the Football Association with improper conduct and faces a record touchline ban which may extend to a complete stadium expulsion for head-butting Hull City’s David Meyler.

The Newcastle manager will accept the charge, described as “serious violent” and “non-standard” by the FA, it is understood. Once the FA receives this officially a three-person Independent Regulatory Commission will convene to decide his punishment.

As of Monday evening the governing body had yet to receive the 52-year-old’s guilty plea, though even if this is not lodged before Thursday’s 6pm deadline the case is expected to be decided before Newcastle’s next match, the trip to Fulham a week on Saturday.

The FA’s designation of Pardew’s proceedings as non-standard indicates he is facing what may be an unprecedented, record sanction for a manager. Blackpool’s Paul Ince was given a five-game stadium ban and a £4,000 fine for “violently shoving” a fourth official during a 2-1 win over Bournemouth in September.

Two years ago Steve Evans, then the Crawley Town manager, was given a six-game ground expulsion and a £3,000 fine for using “abusive and insulting words” that “included a reference to gender”.

As Pardew’s head-butt on Meyler may be deemed a greater offence than either Ince’s shove or Evans’s abusive language, he appears set be handed a more severe penalty. Pardew has already been fined £100,000 and issued with a formal warning by his club for the incident that occurred during Saturday’s 4-1 victory at the KC Stadium.

If he is banned as expected, John Carver, Newcastle’s assistant manager, will take over. A year ago Carver narrowly escaped his own touchline ban after being sent to the stands for approaching Wigan Athletic’s Callum McManaman following his dangerous challenge on Massadio Haïdara during Newcastle’s 2-1 win. The incident involving Carver also included him shouting at Graham Barrow, the Wigan first-team coach. While both received a £1,000 fine from the FA and were warned about their future conduct, only Barrow received a one-game touchline ban.

Pardew will not face police action over the incident, Humberside Police have confirmed. It has received no complaint from Meyler or Hull City and the police are happy to let the FA deal with the matter.

Chief Inspector Rich Kirven said: “We have been working with the FA and the football club to progress the matter appropriately. Having reviewed the circumstances of the incident, it has been agreed that the matter will be dealt with by the FA rather than considering any criminal proceedings. There has been no complaint received from the player involved or Hull City Association Football Club at this time. Whilst we appreciate that some people may have found the behaviour displayed at the game on Saturday offensive, Humberside Police will not be taking any further action.”

Although when issuing the fine and formal warning Mike Ashley, the Newcastle owner, was minded Pardew would keep his job, a ban that would prevent him from leading the team on match days until next season could test his resolve.

Ashley Wootton, a sport and employment solicitor at Thomas Eggar LLP, said: “If Newcastle believe that the effect of [a] ban and negative PR associated with the incident becomes too much, they may suspend their manager with a view to dismissing him for gross misconduct.”